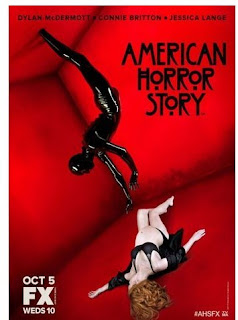 SPOILERS – Well we finally had a happy ending but only after the last living member of the Harmon family was sent off swinging into the afterlife – of course that’s not to mention a new family terrified into leaving the house. And amongst all this we had the usual mayhem and creepiness that has become a hallmark of this truly bizarre and original series. I, for one, have loved the entire season and I’m not at all let down by the ending – though what happened to the ninety minute episode we were promised. This episode was normal length and it did feel rushed in the way it dealt with gathering all the loose ends together, Ben, for instance, was killed off in the first ten minutes. Then we saw him reunited with his dead family and then it was fast forward to the new family moving in, and the Harmons scaring them out of the home so that they could avoid the inevitable tragedy that would befall them if they remained. This scene ticks all the boxes of the haunted house genre and there are one or two genuinely scary moments.


There was a great scene in which the ghosts were getting the house ready for Christmas and Moira was invited into the Harmon family, even becoming godmother to the baby. The dead one that is since the living spawn of Tate is being brought up by Constance and the episode ended with that demon baby slaughtering his nanny and then grinning at Constance. Credit to AHS for producing an addictive first season, which it capped off, fittingly, with an oddly heartwarming holiday tableau of a dead family and their damned roommates around a Christmas tree, even adding a festive soundtrack.
Posted by Gary Dobbs/Jack Martin at 08:13

I have loved every minute of this series, including the finale. Every week I've looked forward to Wednesday night for days... sure, the show is over the top, but it works, at least for me. I'm not sure how they're going to repeat the experience with a second season, as most of the secrets have been revealed and the unraveling of them has been one of the best parts of watching... but if you've been to the website and virtually toured the house, you know there are still plenty of ghosts we haven't met yet. The Black Dahlia murder was the only event we learned about for about a forty-year period of The House's existence, and there are still plenty of questions about the mad scientist/infantata origins of the whole thing. Long story short: I'm scooping this up as soon as it hits dvd.