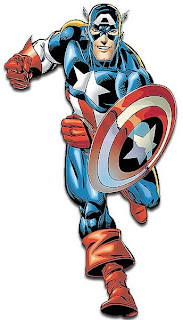 Joe Simon, a comic book industry pioneer whose defining career moment came in the dark days of March 1941 when he delivered a star-spangled superhero named Captain America, has died. He was 98. Simon died Wednesday night in New York City after a brief illness, according to a statement from his family, and his death adds a solemn final note to the 70th anniversary of his greatest creation, Captain America, who leaped across the big screen this summer with the Marvel Studios film "Captain America: The First Avenger." That film grossed $369 million in worldwide box office and earned strong reviews despite early skepticism about the 21st century pop culture potential of a Roosevelt-era character who looks like a walking American flag.


Simon created Captain America with Jack Kirby, a key figure in American comics, and the two would work together for various publishers and as comic books went from quirky confections to American mythology.
Posted by Gary Dobbs/Jack Martin at 06:15