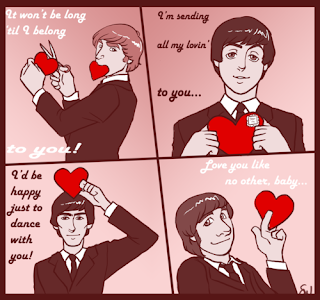 "This will sound like 1920-1940, the time when my father was 20. These are songs I heard, my family, my uncles, everybody sang. And there will be pieces that I've written, but in this style,"

So said Paul McCartney and he's talking about his new album, Valentine and Beatle nut that I am, I'm excited by this. Macca may have gone through a stale patch some time ago but his last few albums have all been uniformly good and his Fireman album, Electrical Arguments is a masterpiece.

"I worked with Diana Krall, and great jazz musicians like John Clayton. This is an album very tender, very intimate. It's an album on the way we listen work with a glass of wine or a cup of tea. From the background music."

It sounds like an album with tracks along the line of Honey Pie, When I'm 64, You're Mother should Know and others of that ilk - sounds like er - gear, groovy, fab to me but what is realy exciting is that McCartney mentioned another album next year and the rumors are that it'll be a follow up to electric arguments. Now that would be fab.