My novella, The Dead Walked: Outbreak is NOW available for purchase from Amazon  as a KDP exclusive before becoming available on all other eFormats early next year. The Amazon deal means that the eBook is also available to prime customers for loan from Amazon's lending library.

The novella is my debut in the horror genre, following on from a string of bestselling westerns written under the name, Jack Martin and published by Robert Hale's Black Horse Westerns line.

For my work in the horror genre I adopted the name Vincent Stark as a nod to that flamboyant horror star, Vincent Price and the surname came from the fact that I'd been reading a lot of Richard Stark. The Dead Walked though is not the first sale for the Vincent Stark name - an upcoming issue of the iconic, Weird Tales will feature the short story, Back then our Monsters were Real which was also comes from Vincent's pen, .

Some said it was viral.
Others claimed it was an act of God.
Either way the result was the same and the dead walked.

September was her favourite time of the year, and late September, when the autumn was just preparing to hand over to winter, when there was still a residue of the late summer warmth in the air, as well as the crisp promise of the iciness to come, had always been, as far as Missy was concerned, the finest chunk of that particular month.
Not for her was the spectacle of high summer, nor the morose beauty of mid winter. Of course they both had their fineries but these paled next to the season when the leaves glittered with reflected sunlight. It was the autumn, with September being the highlight of that season, which she loved – a time when nature put on its finest display as the lush summer growth was magically transformed.
The sky itself seemed to glow at this time of year.
September was a time of promise.
A time of rebirth.
Not this September, though.
This September, Missy would remember as, the time the dead walked.

The second eBook, Dead Days will be published March 2012 and I'm pleased to be able to give you a look at the cover art for the second volume. The man responsible for the cover is once again Tony Masero, and he's managed to fully capture the mayhem and er, boobs of the zombie apocalypse. 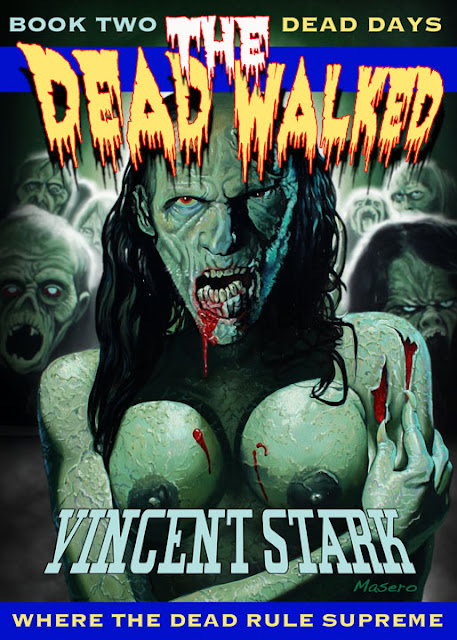 Congrats, have just bought this, maybe I'm first! Though I'm currently on 11-22-63 and loving it.
I found this site whilst researching Oliver Strange's "Sudden" books and you helped re-kindle my love of Westerns. My “mid-life” crisis has manifested in a desire to learn guitar. I’m really no great shakes at it, but I have managed to record a song “Lonesome Cowboy” with my guitar tutor and I’ve made a video to go with it

It’s my homage to the USA and Western movies, a little bit country. I’m in the leather jacket....

You might like to watch to the end to see if you can ID all the big-screen Western movie-stars, plus there’s a little twist at the end.
Hope you don’t think I’m spamming, I do come to this site every day!

Hey thanks for the kind words and the songs great. If I reintroduced you to westerns than that gives me a great thrill and I hope you enjoy the horror novel too. If you want I can embed your video on the Archive - I like that. From one lost cowboy to another - cheers

Thanks for the kind words Gary, they mean a lot coming from somebody I admire, somebody who is walking the walk, embracing the new technolgy and carving out a space for himself in the literary fields he loves.

Please feel free to use my video as you will...

I found your blog looking for articles on the Piccadilly Cowboys, but the indefensibly lurid and tasteless cover for The Dead Walked: Dead Days prompted me to buy both of those books. Good job, man! The books look like a hoot.