The Saint is Back

BBC Radio 4 Extra (previously Radio 7) have just finished a series of three 60 minute dramatizations of the adventures of The Saint - the three full cast dramas are The Saint Overboard, The Saint Plays with Fire and The Saint closes the Case and all are based on the original stories by Leslie Charteris. Paul Rhys is Simon Templer and other cast members include Patsy Kensit, Fiona Thomas and Fiona Fullerton.

The adventures are still available for the next few days HERE 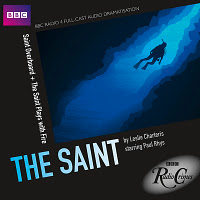 "Back in 1995 I put up to the BBC the idea of dramatising some of the Saint novels. We agreed on three titles, but the commissioning editor suggested that I dramatise two of them (“Saint Overboard” and “The Saint Plays With Fire”) while the third be given to Roger Danes to dramatise (“The Saint Closes the Case”). The director of all three was to be Matthew Walters, and he cast Paul Rhys as Simon Templar. The three 60-minute plays went on air at the end of August and the beginning of September 1995, and got pretty extensive, and complimentary, coverage on Radio Times and by the national radio critics. Even so, and despite intensive efforts, I have found it impossible to persuade the powers-that-be at the Beeb to accept any further Saint material. The good news is that BBC Radio 7 accepted the three plays onto their schedules quite early on, and listeners have had several chances over the years to hear them again. Now, with my two dramatisations issued by BBC Worldwide as part of their Radio Collection, those two at least are now freely available" Producer Neville Telle
at December 18, 2011

I'll be darned. I just clicked on the "Play" button and I got the sound right off nice and clear. I'll have to come back and listen to these Saint programs to refresh my memory from the books. I read several back in the 60's, but can't recall any of the titles. Thanks for post!

BBC Radio have always struggled with the Saint.

In 1960 there was a proposal to have Trevor Howard star in series of Saint shows but Val Gielgud, then the BBC's Head of Drama (Sound)pretty much killed it when he said "The ‘Saint’ stories are vilely written and rather old-fashioned in terms of contemporary criminal literature".