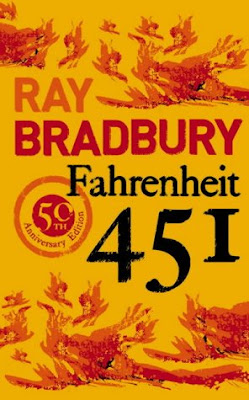 Author Ray Bradbury has finally relented which means that his famed 1953 dystopian classic about a future America in which people are ruled by electronic devices, reading is banned,  will finally become available as an eBook.

Bradbury's hatred of the Internet is well known and according to his agent he's not terribly fond of eReaders either -  the rights for Fahrenheit 451 were expiring and due to the  fact that the digital book market continues to grow, a deal that included eBooks was inevitable. Bradbury didn’t have much choice in the matter.

This week  Simon & Schuster will also publish a new trade paperback edition on January 10, 2012. The mass market editions of Bradbury’s The Martian Chronicles and The Illustrated Man will go on sale in March 2012.
Posted by Gary Dobbs/Jack Martin at 04:41