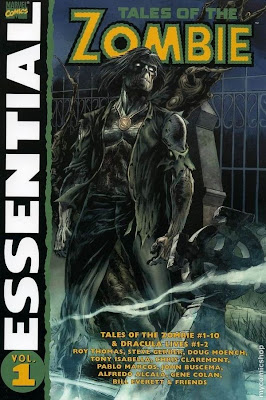 I picked up this graphic novel in my local Borders during it’s closing down sale a few years back – man, I miss my Borders but now it’s gone forever, the chain deader than the undead.  So sad, but there were some bargains to be had during those last few weeks and I spent a couple of hundred pounds in the space of a fortnight but must have come away with more than a grands worth of books and DVD’s. Tales of the Zombie was one of those bargains.

Bound in an attractive softback the book collects together zombie strips from issues 1 – 10 of Tales of the Zombie and Dracula Lives issues 1 and 2. The creative team  consists of Roy Thomas, Steve Gerber, Doug Moench and Gene Colan, as well as several others. The original Tales of the Zombie comic ran from 1973-1975 and told of Simon Garth, a man who was reanimated by mystical means and now find himself under the control of whoever holds the fabled amulet.

The WIKI tell us -
Simon William Garth ,  became a work-obsessed executive of Garth Manor, based in New Orleans. Ambushed and kidnapped by his former gardener, whom he had fired, Garth is to be a cult’s human sacrifice. However, the cult’s priestess, Layla, recognizes Garth as her own everyday-life employer, with whom she is in love. Though her attempt to let him escape is thwarted, and though she is forced to mystically transform his corpse into a zombie with a clouded mind whom holders of the matching amulet could control, Layla, with her grandfather, Papa Doc Kabel, continue to try to help the uncomprehending Zombie reach his final rest.Despite his zombie state, he retains some vestige of his soul: for instance, when under the control of the amulet he has been forced to hurt or even kill people he has come to care about (such as Philip Bliss and Layla), the moment he is free from control his vengeance is terrible. Because of these remnants of soul, Layla and Papa Doc perform a ritual that allows Garth 24 hours in his restored human self in order that he might attend the wedding of his daughter Donna and set what was left of his previous life in order.

The graphic novel is a great collection and as well as the stories there are several text based articles – The Sensuous Zombie looks at the way the undead have been presented over the years,  there’s a look at Voodoo in all its forms, and a great article on George Romero’s Living Dead. The graphic novel retails at £10.99 and is well worth seeking out for some great vintage zombie adventure. 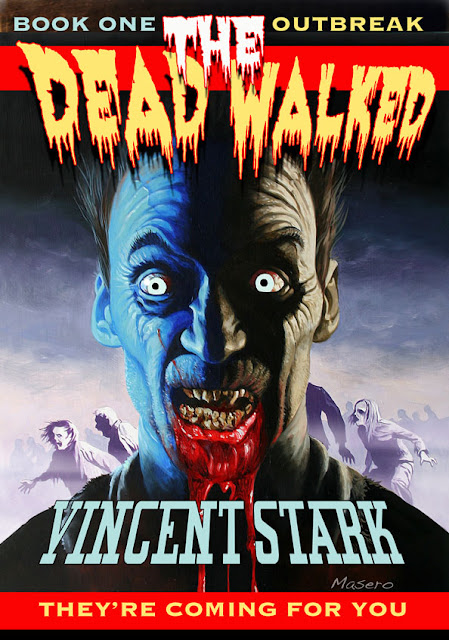 RELATED:The first volume in The Dead Walked trilogy was delayed due to a massive rewrite being required when the third book took on a turn unexpected during the initial plotting – still there’s a lot of swill out there and I wanted the Dead Walked books to be as good as I could make them before making them available to you, the reader. I plan to develop the Vincent Stark name and the only way to do that is to ensure the work produced is of the highest quality and will grab readers by the throat, not letting up until the story ends.

And so January 5th 2011 the dead will finally walk.

By Gary Dobbs, author of a string of bestselling westerns as well as the historical crime thriller A Policeman’s Lot, writing under the name of Vincent Stark
Available in all eFormats and from Amazon, Smashwords, Barnes & Noble  and anywhere else eBooks are sold.