FROM THE GUARDIAN NEWSPAPER 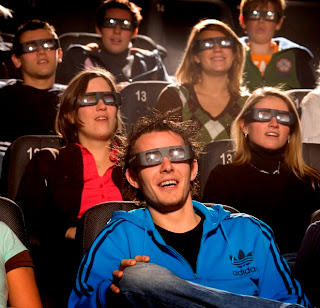 Hollywood's 3D revolution has changed the shape of the modern blockbuster and helped boost box office income for studios in an era of financial uncertainty, but not everyone thinks they're getting their money's worth and a minority complain of dizziness and headaches. Now, new research has for the first time supposedly offered proof that 3D offers no measurable improvement in enjoyment for the vast majority of film audiences.

According to a study of 400 filmgoers by L Mark Carrier, of California State University, 3D movies do not allow viewers to experience more intense emotional reactions, are no more immersive, and do not offer any advantage over their 2D counterparts in terms of enhancing the ability to recall a film's details. Carrier's study did, however, suggest that watching films in stereoscope increased threefold the risk of eyestrain, headache or trouble with vision.

"All other things being equal, I would say you're increasing your chances of having some discomfort," said Carrier at the America Psychological Association's annual meeting on Sunday. "There aren't going to be any benefits in terms of understanding the movie better or making the movie more meaningful, as far as we can tell," he added.

Participants in the research were asked to watch one of three films – Alice in Wonderland, Clash of the Titans and How to Train Your Dragon – in either 2D or 3D. They were then asked to detail their responses using a list of 60 words ranging from the mild, such as "enjoyment", to the more intense, such as "anger" and "rage". Carrier says there was very little difference between the response of those who watched in 2D and those who viewed in 3D, which surprised researchers.

"Many of us were like, 3-D movies are so cool, it's gotta do something," Carrier said. "It didn't seem to enhance your memory at all. That's an unfortunate implication."
The research is just the latest suggestion that the tide is turning against 3D. Many recent films shot in the format – a notable exception is Transformers: Dark of the Moon – have failed to offer a 3D box-office boost in the US, and film-makers are beginning to turn against studios that authorise cheap post-production conversions in the hope of achieving a short-term financial return.

Speaking at a presentation of his own 3D movie, The Adventures of Tintin, Steven Spielberg said at Comic-Con in San Diego last month that he hoped to see ticket prices for 3D and 2D films converge in the future.

"I am certainly hoping that 3D gets to a point where people do not notice it. Because once they stop noticing it, it just becomes another tool and helps tell a story," he said. "Then maybe they can make ticket prices comparable to a 2D movie and not charge such exorbitant prices just to gain entry into a 3D one. Hopefully someday there will be so many 3D movies, prices will come down – which I think will be fair to the consumer."

Posted by Gary Dobbs/Jack Martin at 10:19

Email ThisBlogThis!Share to TwitterShare to FacebookShare to Pinterest
Labels: movies

I have not checked in here for a while as I thought it was getting boring, but the last few posts are great quality so I guess I will add you back to my daily bloglist. You deserve it my friend :)
Fila Girl's Sport Performace Zip Jacket