Sexton Blake - The Vampire Moon and other stories 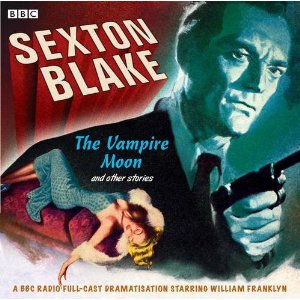 I'm a big fan of radio and like Stephen Fry I'm starting to believe that BBC Radio Four is the only good thing about modern Britain - that's not strictly true and Radio Four Extra (previously known as Radio 7) is actually the station I listen to most. It's got the mixture of drama and comedy just right and you'll never hear any pop music which suits me just fine, as the older I get the less tolerance I have for the inane ditties that pass for music these days - I heard kissed a girl and I didn't like it. And it's not just getting old - modern pop music is so twee, vapid - I mean it's come to something when my kids tell me to turn my music down - Dad. turn that row off we can't hear Jedwood!

However I've gone into grumpy old man mode and am straying from the point...

There's something about well produced radio that allows the listener to get right into the story - anyone interested can find enough old time radio on the web to last several lifetimes. And collecting on CD is easier than ever, after all most old time radio is in the public domain and there are some great companies producing some great discs, with informative packaging - sorry just sticking a label on a disc doesn't do it for me.

Sexton Blake and the Vampire Moon and other stories, is an official release from BBC Worldwide and contains three episodes from a series that was originally broadcast 1967, as well as a bonus episode from 1930 which is one of Britain's earliest surviving drama recordings.

Sexton Blake - The name that spells DOOM for VILLAINY!

These are not readings of the classic stories but full cast dramatisations and even after all this time they still manage to create a believable,if pulpish world, with their sound scape. Sexton Blake first appeared in the same year and month that Conan Doyle killed off Sherlock Holmes in the Swiss Alps.

Sexton Blake first appeared in Halfpenny Marvel and like Holmes he resided in Baker Street but where he differed from Doyle's cerebral sleuth was that he was much more of an action man - the character's penny dreadful style adventures enthralled readers for years.

It was in 1939 that Sexton made the transition to the wireless radio as part of the BBC's Lucky Dip series and the show was a great success. Film actor George Curzon took the title role and the scripts were originally written by then popular mystery scribe, Ernest Dudley. Scripts would also come from Paul Temple creator, Francis Durbridge. The character pretty much carried on in this way for a couple of decades, stiff upper lip, old boy, and it wasn't until the swinging Sixties that the character was given a major overhaul. And it is from this period that the episodes on the CD are taken - there are three great episodes from the 1967 series which starred William Franklin as a Sexton Blake who was now equal parts Sherlock Holmes and James Bond. The series started out on the Light Program before moving to the newly formed Radio Four.

As a nice little bonus this disc contains a rare recording from 1939 with Arthur Wonter in the title role and it is interesting to compare the two versions of the same character
Posted by Gary Dobbs/Jack Martin at 03:45