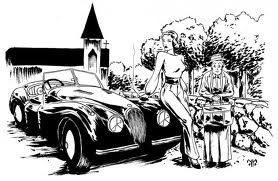 The elderly spinster who dabbles as an amateur detective - the only way one  could use such a character in a crime novel these days would be as a parody or homage. The character wasn't exactly fresh when Agatha Christie first presented Miss Jane Marple to her readers in 1930's Murder in the Vicarage, although Christie had already used the character in the short story, The Tuesday Club which was published in 1927 in The Sketch Magazine. 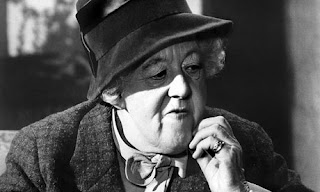 Christie started to think of creating a great female detective after she clashed with stage writer Michael Morton over the stage adaptation of her successful novel, The Murder of Roger Ackroyd. Morton had wanted to turn Poirot into a dashing young Frenchman but Christie would have none of it. Christie was however forced to compromise and allow her character of Caroline Shepard to be changed from an insightful old maid who aids Poirot into a bright young thing to allow for a romantic interest. Caroline was Christie's favourite character from her novel and her transformation  for the stage play stung. Christie told friends then that she would create an aged female detective and thus the seeds of Miss Marple were sown in the writers' mind.

Christie was very well read and kept up with the works of her contemporaries - a favourite writer was Dorothy L Sayers and Christie was taken with the character of Miss Climpson an elderly spinster who  aided Sayer's detective, Lord Peter Wimsey in the 1927 novel, Unnatural Death. Christie and Sayers became great friends and when the first Miss Marple novel was published Sayers wrote to Christie saying, 'Dear old Tabbies are the only possible right king of female detectives and Miss M. is lovely.' Sayers later went onto create a detective agency of ageing spinsters set up by Peter Wimsey and Miss Climpson - Climson may have influenced Miss Marple but now the favour had been returned.

Another writer who helped sow the seeds of Marple was Anna Katherine Green, often called the mother of modern detective fiction. Green used a character called Amelia Butterworth in several mystery novels.The writer was a favourite of Christie who wrote of the importance on her own work in her autobiography by stating that Green's works are what started her thinking of becoming a mystery writer in the first place.

However the British tradition of  the literary spinster can be traced back to Miss Burns in Jane Austen's Emma and Betsy Trotwood in Dickens' David Copperfield. There is also Miss Prism in Oscar Wilde's The Importance of Being Earnest who was interestingly brought to the screen in the shape of Margaret Rutherford, the actress most associated with Miss Marple.

Christie used Miss Marple in a dozen novels and several short stories and the character is arguable the most famous female detective in all of crime fiction. A diverse range of actresses have brought the character to the screen and next to Poirot she is Christie most well loved and read character,

In March 2011 it was reported that The Walt Disney Company had acquired the cinematic rights to the Miss Marple character, and was planning a contemporary adaptation to be set in the United States. It was reported that Jennifer Garner would portray Miss Marple in the new franchise, and that Mark Frost had been hired to write the script for the first film which would give us a younger, more seductive Marple. What Agatha Christie would think of this sexing up of the character would likely be unprintable.