The Children of the night 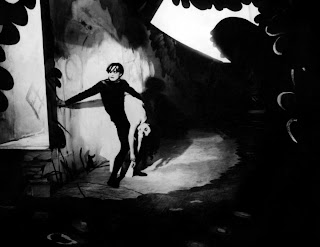 As I’ve said in previous posts, horror movies are as old as cinema itself – versions of Frankenstein and Dr Jekyll were made in American as far back as 1908 and vampires first appeared in American movies in 1910 and a few years later the works of Edgar Allan Poe provided the backbone to D W Griffith’s The Avenging Conscience, and if we look at Europe we can find the birth of the modern horror movie with Germany’s Der Student Von Prag in 1913 and Der Golem in 1914. In fact German cinema had a lot to do with the early horror film and in 1919 The Cabinet of Dr Caligari set the blueprint for what was to become the modern horror film. In Dr Caligari a mad doctor invokes and controls a somnambulist, sending him to murder those who have sneered at his work.
These characters – the mad doctor and the monster he has created became the key elements of Hollywood horror.
There were many horror movies made during the silent period but it wasn’t until the coming of sound that the genre really took off. 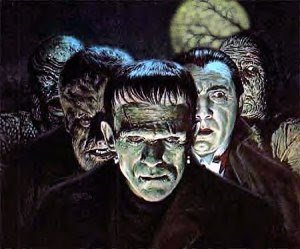 Universal became the home of horror after a string of horror hits that started with Todd Browning’s Dracula and James Whale’s Frankenstein. Bela Lugosi recreated the role he had first played on the stage for Dracula and for a period he became the studio’s biggest money maker, but when Frankenstein which was originally to be directed by Robert Florey fell into the hands of James Whale the first true horror classic was born. And like Dr Caligari both films featured maidens terrorized by monsters before our square jawed hero comes to the rescue….ahh, simpler times! Before anyone knew it mad geniuses were everywhere, even Bela Lugosi’s Dracula can been seen as a mad genius of sorts – Doctor X (1932), Mystery of the Wax Museum (1933) and Island of  Lost Souls (1933) are just three of many movies that expanded upon the formula that had not yet been set in stone.

‘Listen to them, children of the night. What music they make.’ 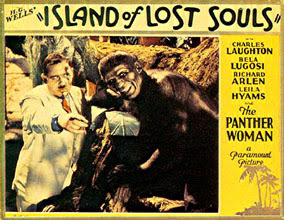 It was during this period that the first horror superstars were born, actors who would forever be associated with the genre. Lon Chaney was originally to have played Dracula in 1931 but the when the actor died the role fell into the hands of Bela Lugosi and the actor also inherited Chaney’s crown as the king of horror. Boris Karloff was excellent as the monster in James Whale’s Frankenstein. John Carradine made a far less effective Dracula than Lugosi but after he played the character he too was forever a horror actor. As was Lon Chaney Jr who carried the Chaney name forward while Vincent Price put the ham back into horror. It was not until the Hammer cycle of movies that actors would be so associated with the genre when Christopher Lee and Peter Cushing became the new icons. And since that period perhaps only Robert Englund and Bruce Campbell have attained the same level of genre identification.

So the next time you sit down to watch a horror movie, just remember that it’s roots stretch back to the dawn of cinema itself.
Posted by Gary Dobbs/Jack Martin at 02:51