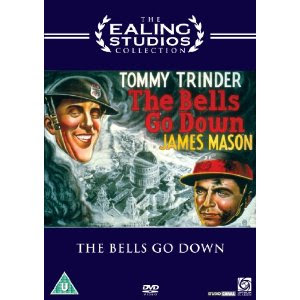 When war broke out in 1939 Britain's cinemas were closed, however the value of films in keeping up morale was soon realized and the cinemas were reopened. They had been closed for only ten days before an Parliament decided to reopen them and they became the main source of entertainment and recreation during the troubled times.

The earliest British war film, The Lion has wings which produced at a breakneck speed by Alexandra Korda was a curious mix of documentary and drama and whilst it may not have worked as a film, copies were laughed t in Berlin it did lead to more effective propaganda being worked into dramatic presentations.

The movies were effective in saying that the old class system should be put aside and that this was was the people's war, and the Ealing war films represented these new ideas. The same studio made The Foreman went to France in 1942) which showed how an ordinary man, a working stiff, retrieved a vital piece of machinery from from France. And 1943's The Bells go Down showed the work of the fire service in London and placed stress on the ideals of comradeship and bravery. The movies showed that it was ordinary people who would win this war and the studio went so far as to completely destroy the image of the old style officer and gentleman in 1943's, The Life and Death of Colonel Blimp. 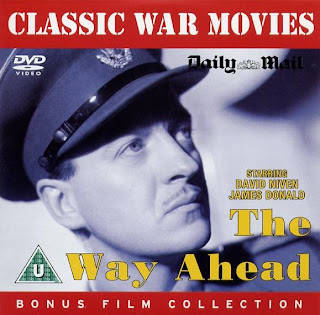 Comradeship, cooperation, dedication to duty and self sacrifice typified the early British World War II movies.  In Which we Serve (1942) was perhaps one of the first of the truly classic war movies. The three main characters are the captain, a petty officer and an ordinary seaman but they are all equal in their devotion to the ship and their duty to country. And The Way Ahead (1944) showed how a group of conscripts from all walks of life were turned into an elite fighting unit.

And it wasn't only the men who were fighting the war and 1943's The Gentle Sex showed how a group of women were turned into defenders of the nation in the territorial army. Britain was at war and the cinema had no time to question what was going on, or stand back and consider the morality of war, there were battles to be won and on screen as in life we were going to get on with it.

It was a case of, keep a stiff upper lip old boy.