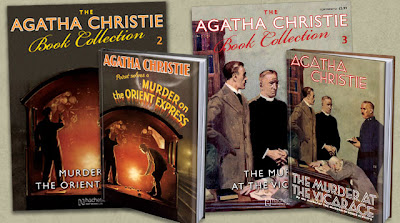 The accepted theory of the times was the children shouldn't be taught to read until they were eight years old because, the fashionable opinion was that both eyes and brains would develop better if they were used less during the early years. However the child that was to become crime queen, Agatha Christie amazed her parents by teaching herself to read by the time she reached the age of five.

It was Agatha's nursery nurse who informed Agatha's parents, telling them - 'I'm afraid Ma'am that Agatha can read.'

Apparently whenever a story was read to the young girl, Agatha would then study the books, trying to make sense of the words until she in fact could read. Agatha's mother, Clara whilst pleased with her daughter's display of intelligence restricted reading to the afternoon so as not to tax the young brain. And years later Agatha wrote in her autobiography - 'The book ban had a long lasting effect. Even to this day if I sit down and read a novel after breakfast I have a feeling of guilt.'

Christie is said to be the world's bestselling writer, her books coming third to The Bible and the collected works of Shakespeare and there is a great series currentlty available from Hachette Partworks that enables interested readers to collect the complete works in perfect facsimile editions. The books are identical to the original hardcovers - indeed they are published by Collins who has for many years been the UK publisher of Agatha Christie. Each fortnightly magazine features articles on the specific book as well as features on Christie's life.

I picked up the first issue in the local supermarket and immediately subscribed as the thought of owning the complete set in these facsimile editions appeals to me - not only will they make up a library of some of the best detective fiction ever published but each individual title is a book lovers dream - they are identical in every way to the original hardcover editions - mind you they wouldn't be much good as facsimiles if they weren't.

Each book's dust jacket is a faithful replica of the original first edition cover artwork and also features contemporary advertisements for other Collins Crime Club titles.

Check out the website HERE
Posted by Gary Dobbs/Jack Martin at 03:30

This post give a different look of photo books. I really got a nice post to find out new looks of books review.Each annual appearance column on the specific book as able-bodied as appearance on Christie's life.