Will it be a battle of The Saints? 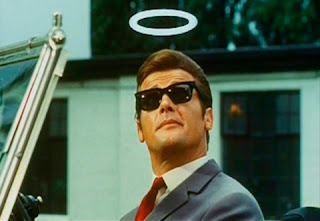 It's seems that 2012 is the year of the battles over classic heroes. Not only do we have the BBC V CBS over the rights to a modern Sherlock Holmes bout in full swing, but now The Saint has thrown down his halo and clenched his fists

Variety are reporting that .RKO Pictures is reviving Simon Templar and "The Saint," signing Travis Wright ("Eagle Eye") to pen a script based on the debonair hero with an eye to developing a trilogy with producer Rick Porras. Projects will be based on remake rights to three of the nine "Saint" films in RKO's library, but will this cause conflict with the ongoing project by Geoffrey Moore (son of Roger) to bring the character back to the small screen?

The franchise features Simon Templar, a Robin Hood-like figure who punishes corrupt politicians and businessmen as well as mashing mobsters and bashing bruisers.

The character first debuted in Leslie Charteris's novel Meet the Tiger, which spawned a long-running series of books. RKO owns the rights to several films based on The Saint, including 1938's The Saint in New York and its follow-ups. It will be interesting to see how the films develop as Ian Dickerson, president of The Saint Fan Club pointed out on his Facebook page that -  "RKO have the rights to remake their films as long as they don't change the dialogue or the length of the pictures. They must be remade as films for the cinema, they do not have any TV rights. So if they remake The Saint Meets the Tiger it'll be 79 min long, Saint in New York 69 mins. Hardly feature film length nowadays.."

And what of the new TV series? Will we ever see it? In recent years we've heard that James Purefoy had been cast as The Saint, then it was Dougray Scott. Ahh well, only time will tell...just as long as they don't cast Daniel Craig.
Posted by Gary Dobbs/Jack Martin at 04:01

Email ThisBlogThis!Share to TwitterShare to FacebookShare to Pinterest
Labels: the saint

Plans for the return of The Saint on TV are moving ahead and I'm hopefully that a formal announcement will be made in the Spring.