We hand over the controls of the Archive to writer, Brian Drake who tells us a little about his new thriller series, the Rogue Gentleman. I'm pleased to once again welcome Brian to the Archive - like myself he's a lifelong fan of Ian Fleming and the James Bond series so it comes as no surprise to discover that Fleming's works played some part in Brian's new project. 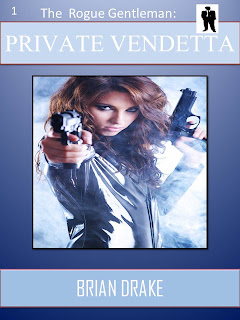 "Thank you, Gary, for allowing me to promote my new ebook on your site. Much appreciated."

Steve Dane, The Rogue Gentleman, an international adventurer who rights wrongs wherever he finds them, fails to prevent a young woman’s abduction.  But that doesn’t stop him from finding her.
Officially hired by the girl’s father, Dane battles gunman and evades police as he discovers the decades-old vendetta behind the kidnapping; he soon learns that the grudge is just the beginning and peels back the layers of a more fiendish plan that goes beyond a desire for vengeance.
Assisted by his lover, the luscious Nina Talikova, Steve Dane dives in head first, the only way he know how, into a conspiracy of terror the likes of which the world has never seen, orchestrated by a powerful and mysterious woman known only as “The Duchess”.
When Dane finds The Duchess, he will sacrifice anything, including his life, to destroy her.

Once again Ian Fleming is partially responsible for the creation of Steve Dane. Author Ben Macintyre published a book, appropriately titled For Your Eyes Only, that was part of the Fleming Centennial celebration which listed some of the ingredients Fleming mixed into the Bond character—the exploits of real-life British agents such as Eddie Chapman and Biffy Dunderdale, who lived lavish lifestyles while fighting for queen and country. Chapman is unique since he was a full-time crook rescued from prison in return for serving his country. He was ordered to be an international playboy while tripping up the Germans and he went all out. I wanted to do a character like that, but, of course, make him an American; since I didn't want to do a World War Two story (maybe someday!) I needed a reason to have him operating in contemporary times. Having already done a spy story, I didn’t want this to be about a secret agent, per se, but somebody who could get involved with international intrigue and mix it up with the usual spy novel suspects.
Instead of a government agent, Steve Dane is a former spy and mercenary now living lavishly and chasing trouble and intrigue on his own terms. How he supports himself is part of the on-going subplot. Did he acquire his wealth honestly or by nefarious means? The good guys think he's a bad guy; the bad guys think he's one of them; he's able to play both sides against each other and, like Boston Blackie and The Saint before him, come to the aid of those who have nowhere else to turn as long as he can stay one step ahead of the cops and the crooks.

There's a bit of Nick & Nora Charles mixed in with Steve Dane and his lady friend, Nina Talikova; the stories mix adventure with light humor and so far readers think the combination works. They’re perfect if you’re one of those who ride a commuter train every day and want something quick to read.

The first installment, PRIVATE VENDETTA, is out; MOVING TARGET and THE ZETA CONNECTION will follow in February and March and, of course, three more after that. After the first six, I’ll write a totally different book but that’s something we’ll talk about later. I hope you have as much fun reading the stories as I have had writing them.
Posted by Gary Dobbs/Jack Martin at 02:41