Archive's Greatest Hits - the battle of the Bonds 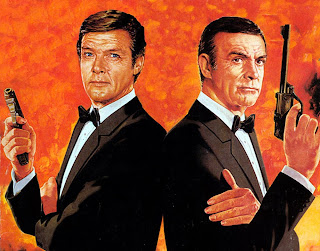 While we wait for the next James Bond movie,  I thought it would be nice to take a look back at 1983, a significant year for James Bond since there was not one but two Bond movies hitting the box-office.

How could this be?

Well the genesis goes back to when the first movie was in development - the first Bond film was intended to be an original story called Thunderball which had been written by Ian Fleming, Kevin McClory and Jack Whittingham. McClory always claimed to have invented SPECTRE. However when the script fell by the wayside Fleming later salvaged it for his 1961 novel, Thunderball.

McClory and Whittingham sued Fleming saying that the book used many of their ideas from the aborted screenplay. The case was settled  but McClory ended up retaining certain rights to the characters and plot. Later when McClory made moves to put the a movie version into production a deal was reached with Broccoli and Saltzman and the movie became the fourth James Bond movie.


However McClory had often tried to get a series of Bond movies into production based on  ideas from the Thunderball script but legal battled with EON Productions kept this from happening. That was until the early 80's when EON found themselves unable to stop McClory from putting the film into production. And when news broke that Sean Connery had signed to play Bond in this unofficial Bond movie Eon were horrified. 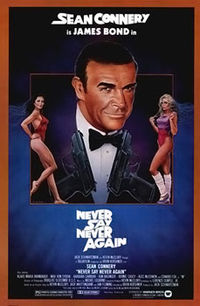 In 1982 McLory wins a legal battle and can produce an "independent" Bond film. "Never say never again" (NSNA) is one of the two "unofficial" 007 films made outside EON (the other is the 1967 comedy spoof "Casino Royale"). NSNA is a remake of "Thunderball" and stars the original Bond, Sean Connery -who comes back to the role after twelve years of absence.

Thus in 1983 there were two Bonds in the cinema - Octopussy had a summer opening and Never Say Never Again opened in the autumn. Which is the better Bond movie though? Well Octopussy won out financially but Never Say Never Again wasn't too far behind. And Octopussy too benefited from having all the series trademarks - the opening gun-barrel scene for one thing. And of course the regular supporting cast - Desmond Llewellyn, Louis Maxwell and Robert Brown who had succeeded Bernard Lee as M. While Never Say Never Again's biggest pull was that it had Sean Connery, the man who many considered the real James Bond.

The Bond films however had moved on since Connery's days and his performance in Never Say Never Again, whilst enjoyable, doesn't come close to the earlier movies. And like Thunderball, the film it remade, it suffered from being over long with a severe drag in its middle section. The script curiously mimiced Roger Moore's lightweight style which has never made sense to me - surely having Connery in the role was such a coup that the hard edge of the early Bond's should have been the template. 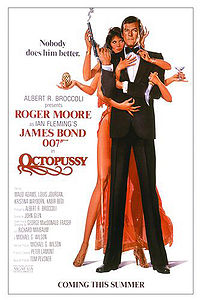 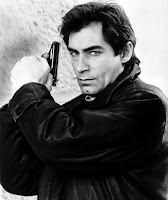 I suppose there was no clear cut winner in the battle of the Bonds - if there was a winner, then maybe it was the fans because they got two Bonds in the same year. However the saga would continue and in 1999 McClory once again attempted to put another remake into production, this time called Warhead. Sony backed the movie and Timothy Dalton was said to have been cast as James Bond. However EON managed to block the film in court and McClory's party had to cede all rights to make movies from the Thunderball scripts.


These days EON own all rights to the Thunderball scripts and no further movie adaptations can be produced. McClory died in 2006.
at January 28, 2012

There was also the U.N.C.L.E. telefilm, The Fifteen Years Later Affair, at that same time with a scene where George Lazenby, driving an Aston Martin with the vanity plate JB on the front, witnessing Napoleon Solo in a car chase and lending a minor hand.

All three serious Bond actors playing the same character, sort of, at the same time.

What doomed NSNA was the fact that it was a lame remake of a Bond film Sir Sean had already done. Octopussy and Thunderball were both classier films.