Star Trek 2 - the voyages are ongoing 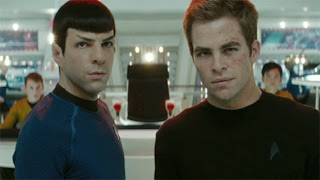 Is it Star Trek 2 or Star Trek 12?  Whatever the number, the movie starts shooting this week for a May 2014 release and new casting details have emerged - Joseph Gatt has been added to the list of actors appearing in the film.

The film is described as bigger in scope than the original and word has it that Abrams himself has travelled to Hawaii to scout a location to double as part of a “jungle planet.” Location shooting is also said to occur at a Los Angeles museum for what is supposed to be a “famous Star Trek location.” Most of the filming, however take place on the Paramount lot.

It has also been confirmed that none of the cast of the original series will appear, which is certain to piss off the Shatner. Leonard Nimoy appeared in the last movie but this time the producers want the movie to stand on its own and create its own personality away from the original series. But, that doesn't mean no one is coming back. He's not exactly a face from the past, but it looks like Bruce Greenwood will reprise his role of Christopher Pike in "Star Trek 2.
Posted by Gary Dobbs/Jack Martin at 02:15

May 2013, and not forgetting the big news of the signing of Mickey from Dr Who.

I wait with baited breath.