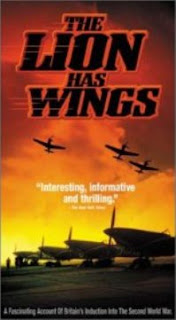 The series which provides a time-line of the second world war in movies can not be complete and list every aspect of what was a truly global war. However by selecting key movies we can provide the viewer with a list of films that when watched in order will give a good grounding of the sequence of events during this terrible period of history. It will also point you towards some great movies.

The Lion has Wings - This docu-drama was made and rush released in 1939 and convinced the British government of the use of film as a propaganda tool. The film stars Michael Powell and Ralph Richardson and is worth watching for its historical importance.

The Lion Has Wings, intended to reassure the public of the might of the British Air Force, was already well on the way to completion by the time war broke out. In the end, shooting took just twelve days. The Ministry of Information assigned an Air Force advisor to the production and several sites were identified for filming. This is the reason why the film has three directors - film was shot simultaneously in various locations, including Mildenhall in Suffolk for the preparations for the first bomber raid and Hornchurch in Essex for Fighter Operations. The film was completed in five weeks and was released in early November. The all-star cast were all paid a flat fee of £5, although all were compensated by Korda once the film started to do well.

1939 saw a period of relative peace - a time that has become to be known as the phony war - The Winter War (1989) tells of late November of that year when Russia attacked Finland. The film is available on DVD as a part of a double pack with Ambush. Both movies are absolute classics.  The Winter War was a military conflict between the Soviet Union and Finland. It began with a Soviet offensive on 30 November 1939—three months after the start of World War II and the Soviet invasion of Poland—and ended on 13 March 1940 with the Moscow Peace Treaty.

Defiance (2008) is set during Germany's occupation of Poland and gives Daniel Craig one of his finest roles - he is excellent as Tuvia Bielski, the eldest of four Jewish brothers and the eventual leader of the Bielski partisans. The film is both action packed and thoughtful and when watched as pure entertainment it is faultless. It also offers a graphic reminder of the horror of the times in which it is set, and of how the Jewish people faced the horror that befell them with dignity and courage. A great film with great performances and telling a story that needs to be told.

Dunkirk (1958) tells of events that are still celebrated today by the British, of how the country turned a defeat into a triumph and bravery and strength. That Dunkirk spirit is still evoked today in times of trouble.


The movie stars John Mills and Richard Attenborough and is told in a captivating fashion. It still works when viewed today, even if some of its patriotism seems simplistic by today's standards. The film relates the story of Operation Dynamo, the evacuation of surrounded British and French troops from the beaches of Dunkirk. It does so principally from the viewpoints of two people: a newspaper reporter and a soldier. n May 1940, during the Battle of France, the British Expeditionary Force in France aiding the French, was cut off from the rest of the French Army by the German advance. Encircled by the Germans they retreated to the area around the port of Dunkirk. The German land forces could have easily destroyed the British Expeditionary Force, especially when many of the British troops, in their haste to withdraw, had left behind their heavy equipment.

Winston Churchill ordered any ship or boat available, large or small, to pick up the stranded soldiers, and 338,226 men (including 123,000 French soldiers) were evacuated – the miracle of Dunkirk, as Churchill called it. It took over 900 vessels to evacuate the Allied forces.