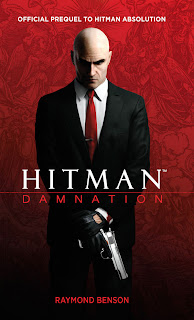 Former James Bond scribe and Archive friend, Raymond Benson will see a new novel published later this year based on the Hitman video game franchise -  Benson, who writes under the pseudonym David Michaels, is no stranger to the video game world. His novels Tom Clancy’s Splinter Cell and its sequel Tom Clancy’s Splinter Cell—Operation Barracuda were both New York Times best-selling books. He also worked with John Milius on the Homefront: The Voice of Freedom game tie-in novel.

Benson’s new book will be called Hitman: Damnation. It will be published by Del Rey, a division of Random House. The story is set between the events in Hitman: Blood Money and the upcoming Hitman: Absolution.
Del Rey has yet to release details on global distribution, but states that the Hitman: Damnation will be in several more countries around the world.

The Archive interview Raymond way back in 2009 - find it HERE
Posted by Gary Dobbs/Jack Martin at 03:03