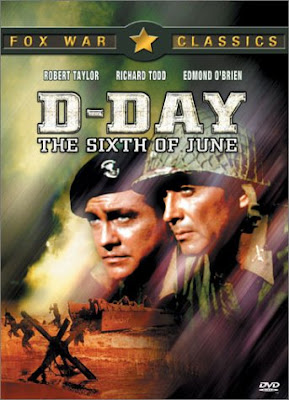 Operation Overlord was the most daring and complicated military operation of the entire war. It was the greatest amphibious invasion in the history of warfare and the risks were immense. The consequences of failure were unthinkable - a bloodbath on the beaches and the continued domination of Nazi Germany in the West. Nothing could ever truly recapture the horror and daring of that day but that hasn't stopped film makers from trying.

Spielberg's Saving Private Ryan (1998) attempts in its opening scenes to show what it must have been like on the Normandy beaches. It was the American, particularly those landing on Omaha Beach who took the worse of the enemy fire, and this movie perfectly depicts the horror, confusion and downright carnage of the beach landings. It is a powerful if viscerally graphic film that has made us realize how much we owe to the men and women of the rapidly dwindling "Greatest Generation. 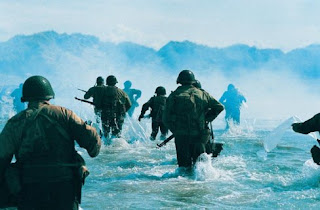 1962's The Longest Day is an expensive attempt to show just what happened on D Day, and although it is a great war film it is somewhat flawed in that it relies too much on typical Hollywood heroics. The all star cast also works against the story of ordinary men living in extraordinary times. Still it's well worth watching but for realism look elsewhere.

D Day 6th June (1956) is not really a D Day movie at all but rather a melodramatic romance set in Britain during the build up to D Day. Robert Taylor plays a married U.S. Army colonel who’s in love with Valerie Russell (Dana Wynter), who’s also involved with Lt. Col. John Wynter (Richard Todd). The film is essentially an extended flashback as the two officers head to the Normandy beaches and exchange tales about the woman they are unwittingly both in love with.

Fresh from their triumph with ,Saving Private Ryan, Hollywood insiders Spielberg and Hanks undertook an even more ambitious World War II project: a ten-part series following a single infantry company from training through combat, victory, and occupation.  Their reward—and ours—is an incomparable film of shared sacrifice and uncommon heroism.  As good as "Saving Private Ryan" is, "Band of Brothers" raises the bar.

Where Eagles Dare (1968) This is an oddity amongst movies that use D Day to tell their story.Richard Burton stars as Major John Smith, a British agent during WWII who is in charge a group of six Allied soldiers given the task of rescuing an American general--who is reportedly in possession of the plans for D-Day--from a seemingly impregnable German fortress. The film also features Clint Eastwood which makes it OK in my book.