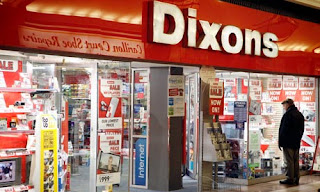 The electricals company Dixons has reported better than expected Christmas trading and said it was now confident it could repay a make-or-break £160m bond later this year.

John Browett, chief executive of Dixons Retail, said the company's finances had been bolstered by bumper demand for tablet computers and ebook readers. "This was an important trading period for us to get through, and we are satisfied by the results that we have got the cash and banking facilities to repay these bonds."

Like-for-like sales at UK stores were still down 7% in the 12 weeks to 7 January, but the retailer said profit margins had improved as growing numbers of customers turned to its IT support service, Knowhow, for help.

Group underlying sales finished down 5%, as a strong performance by its Nordic operation was cancelled out by problems in the eurozone, with sales down sharply at its UniEuro chain, in Italy, and in Kotsovolos, in Greece. The shares closed up more than 10% at 10.94p.

Philip Dorgan, analyst at Panmure Gordon, said the performance pointed to light at the end of the tunnel for Dixons. "The most important trading period of the year is over and with other retailers dropping like flies, these numbers have to be mildly encouraging. We think that it can repay its bonds this year, helped by planned lower capital expenditure and cost savings."

But internet retailers such as Amazon, and the supermarkets, remained a real threat to Dixons, Dorgan said. If trading deteriorated and the retailer was unable to generate sufficient cash to repay the bond, falling due in November, it could be forced to sell the company's crown jewels, the successful Scandinavian chain Elkjøp. The electronics market has been one of the hardest hit by the downturn in consumer spending, with demand for TVs and games consoles falling by as much as 20%. That, coupled with cut-throat competition from the internet and supermarkets, is why the US group Best Buy recently shut its fledgling UK chain, while the French group Kesa in effect paid a bidder to take loss-making British chain Comet off its hands.
Posted by Gary Dobbs/Jack Martin at 02:55