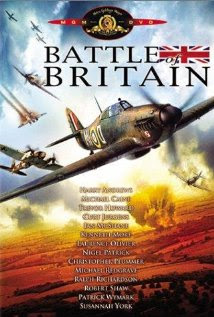 There have been more movies made about World War II than  any other conflict in history - the war was fought on many fronts, in a diverse range of theaters and over the years film-makers have tackled them all.

The Battle of Britain (1969) is regarded a classic, though when viewed today it seems rather plodding - it runs for 132 minutes and in striving for historical accuracy it does sag at times, but it depicts a series of events that saved the UK from being overrun by the Jerry and in doing so it does it well. The aerial battles are intense and expertly filmed. The current special edition DVD is superb value with wealth of special features including a documentary which puts everything in historical context.

If I had to pick one film to represent the attack on Pearl Harbour which occurred in 1941 and brought America into the war it would be, Tora, Tora, Tora (1970). Forget Michael Bay's Pearl Harbour (2001) which may have had better effects but came nowhere near the quality of Tora, Tora Tora. This single event may have finally dragged America into the war, but in truth they were already involved in supporting the UK and supplying both arms and  aid. The entry of the US into the global conflict but the majority of the American public were against the US fighting another war in Europe, until that day in December 1941 when death reigned down on the Hawaiian military base. Like Battle of Britain before it, Tora Tora Tora is made in a semi documentary style, and because of this both films are plodding on times though the aerial effects make up for any shortcomings in dramatizing the events. 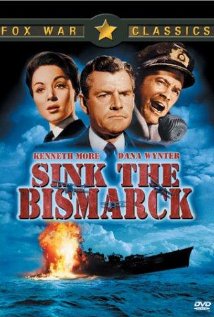 And from the air to the sea we come to Sink the Bismark (1960) - this British production looks at the cat and mouse game between the Brits and the Jerrys which culminated in the sinking of the Bismark. It stars Kenneth Moore,  a regular in Brit war films, and realistically depicts the events after the British became obsessed with destroying this particular warship. The film was praised for its accuracy on its original release, though some critics thought the acting was wooden on times and far too formal. Though this was reflective of the actual times and the film is thrilling an exciting in a boy's own style. The film is currently available as a DVD double pack, twinned with another sea based world war II classic in The Enemy Below (1957) which stars sleepy eyed Robert Mitchum and is itself an impressive movie.

And we're back on dry land for a look at the battle between The Desert Rats and the the respected German commander Rommel. There's a great DVD double pack containing The Desert Rats (1953) and The Desert Fox (1951) - and for anyone wanting a celluloid recreation of these events this DVD set it pretty much indispensable. James Mason plays Rommel in both movies which adds some continuity between pictures. 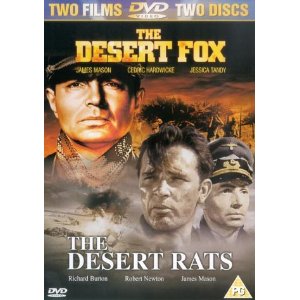 The Desert Fox, released six years after the end of the War, is a solemnly respectful tribute to Erwin Rommel, Germany's most celebrated military genius. James Mason's portrayal of this gallant warrior became a highlight of his career iconography. The film itself is oddly disjointed, though: a pre-credit commando raid to liquidate Rommel is followed by a flashback to the field-marshal's lightning successes commanding the Afrika Korps--a compressed account via documentary footage and copious narration (spoken by Michael Rennie, who also dubs Desmond Young, the Rommel biographer and one-time British POW appearing briefly as himself). The dramatic core is Rommel's growing disenchantment with Hitler (Luther Adler), his involvement in the plot to assassinate the Fuhrer, and his subsequent martyrdom.

The Desert Rats stars Richard Burton in only his second Hollywood role (between Oscar-nominated turns in My Cousin Rachel and The Robe), as a Scottish commando put in charge of a battalion of the 9th Australian Division defending Tobruk. The Aussies don't like him, and with a year of grim North African duty already under his belt, he's not too crazy about his new responsibilities either. The outfit is charged with staving off the battering assaults of Field Marshal Erwin Rommel for two months, to give the British Army time to regroup in Cairo and prepare for a counterattack. In the end, the "desert rats" play hell with the Desert Fox for 242 days, during which time they and their commander develop some mutual respect.

Next up in our World War movie timeline - Russia