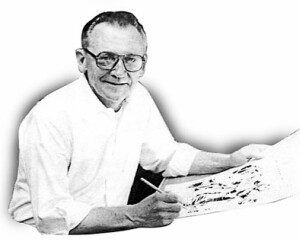 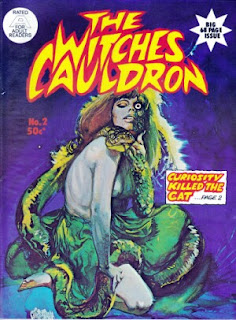 Back in the 1970s, American comics fell into two distinct categories. The traditional colour comics were aimed at the juvenile market, but a new style of black-and-white comic was aimed at the adult or "mature" reader.

The colour comics included the products of Charlton Publications, Inc. which put out a raft of horror titles that were euphemistically marketed as "ghost" or sometimes "mystery" titles.

The leading b&w titles, Creepy and Eerie, were published by James Warren, whose main rival was magazine entrepreneur Myron Fass, once described as the "demon god of pulp".

Probably a prime concern of the editors of juvenile colour comics was to see that the grisly excesses of the nothing-barred, b&w camp didn't find their way into the pages for which they were responsible, thus corrupting the minds of young innocents and infringing the code of the American Comics Authority whose seal of approval appeared on their comics' covers.

Charlton's editor, George Wildman, had a background as a cartoonist and is famously known today for his classic work as a top Popeye artist. But when Charlton's output was at its peak he was the head man for more than forty titles across all genres. Despite the huge workload this must have entailed, he was very successful at observing the fine line that separated "juvenile" from "mature" while at the same time not devitalizing his comics.

One proof of this was that the Charlton ghost comics were eagerly picked up by Australian publishers unable to secure foreign syndication rights in the US horror comics for grown-ups. And Pitt Street, Sydney, companies like Gredown Pty Limited happily emblazoned "Rated A for Adult" warnings on the covers. No doubt it was a better sales ploy than the comics-code label on the original US printings that suggested the opposite! The Charlton artwork, of which only the black and white linework was used by the Aussies, was surprisingly effective without colour. Perhaps the very lack added a darker dimension to the stories.

Today's bonus-length Sunday comic was the lead item in the October 1976 Ghostly Tales in the US and was picked up the same year for b&w reprinting in The Witches' Cauldron in Australia.

Keith Chapman, the story's author, tells us he had one disappointment with The Wrath of the Masalai: botched continuity. The characters as drawn on the first page bear no resemblance to the way they appear subsequently. Dr Barrington Smythe, dark and moustached, is later shown as clean-shaven, white-haired and wearing glasses. Lew Powell is red-haired and bearded on the first page but yellow-haired and beardless elsewhere.

"Ah well, I hope the confusion doesn't spoil the story for anyone," Keith says. "When I think of an editor struggling to mastermind 40 titles while drawing Popeye cartoons, I can forgive just about anything. During my own comics career in the UK, I was for a time the place where the buck stopped for ten, 64-page pocket comics a month while simultaneously launching and doing all the editorial work on a 128-page monthly mystery magazine. Oh, and I wrote the odd comic script, too! In circumstances like these, mistakes seemed almost guaranteed. Actually, they were no more common than in the output of the bigger, properly staffed corporations." 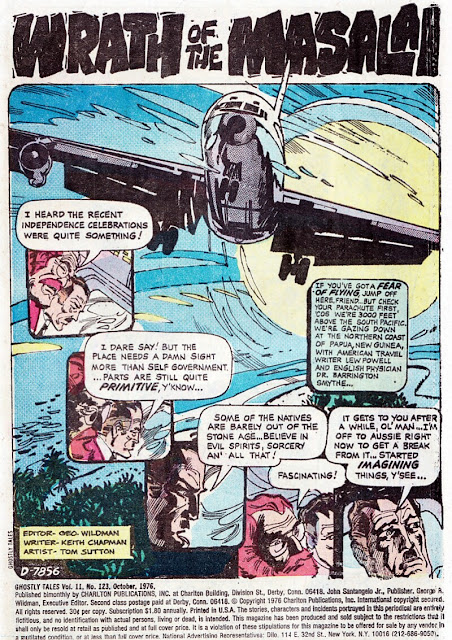 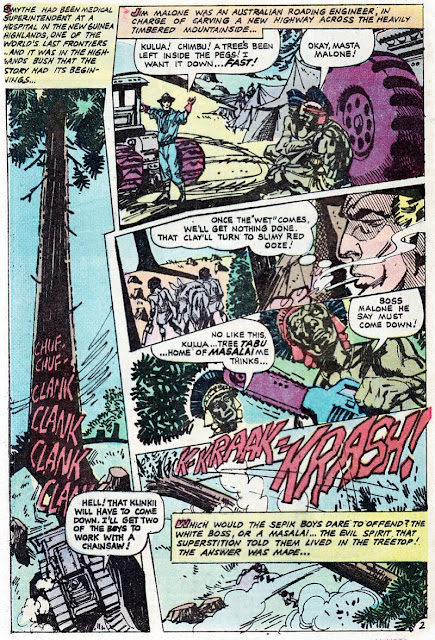 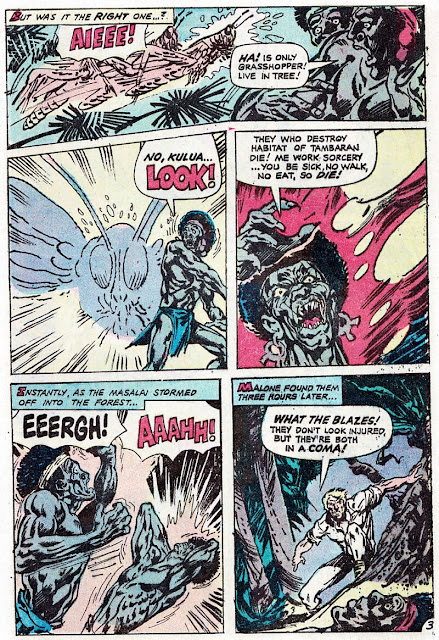 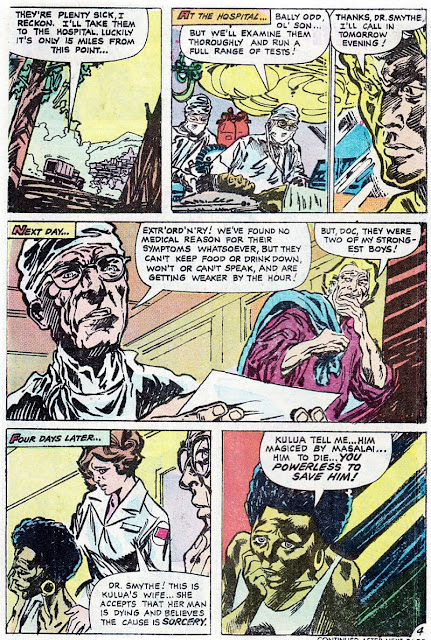 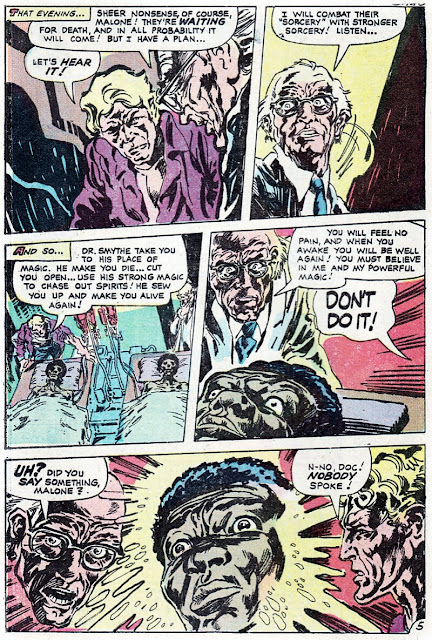 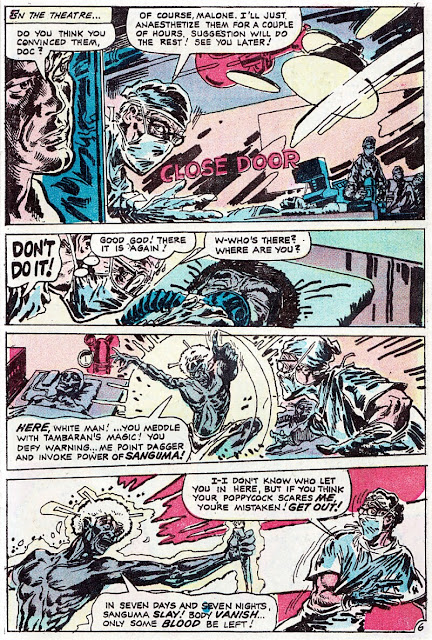 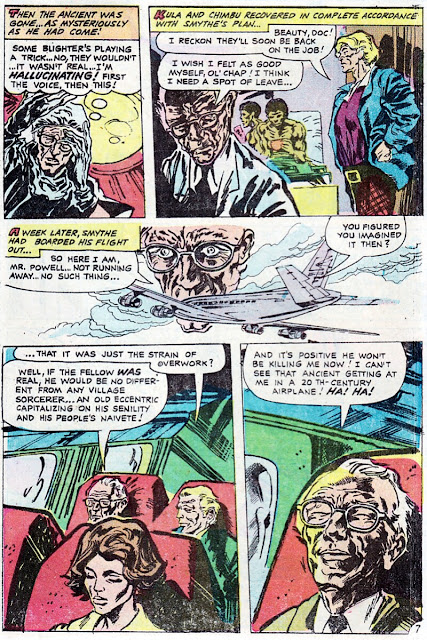 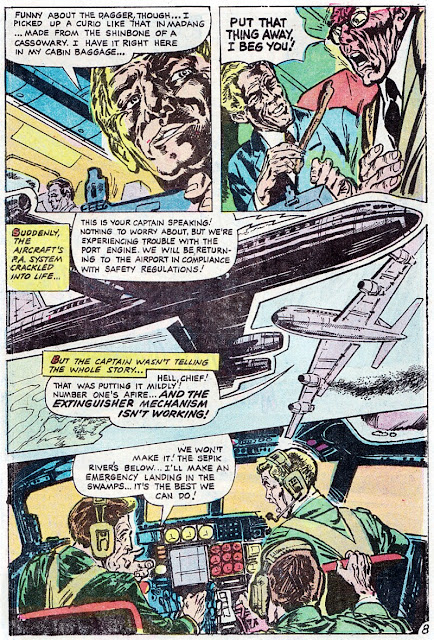 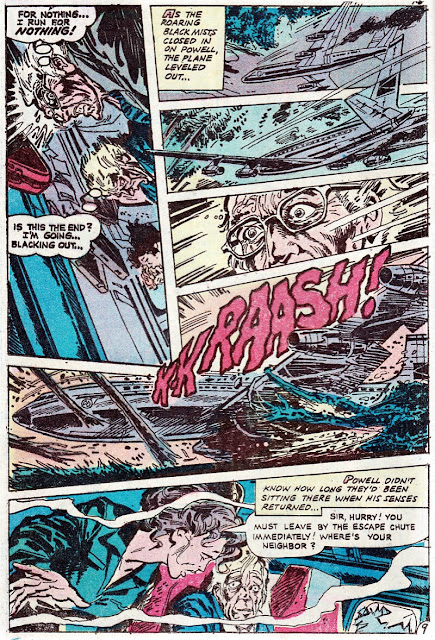 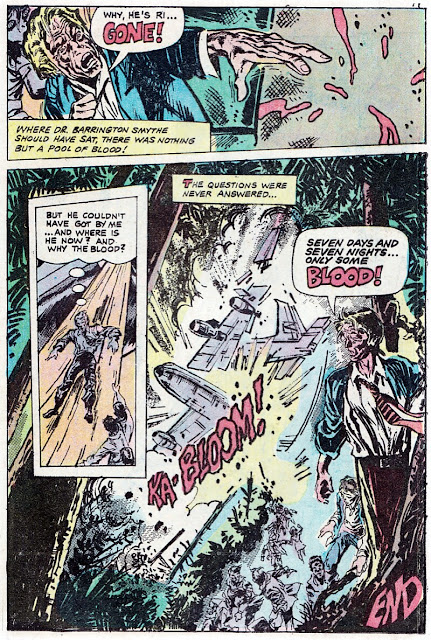 Posted by Gary Dobbs/Jack Martin at 03:55