Sherlock Holmes and the case of the BBC V CBS 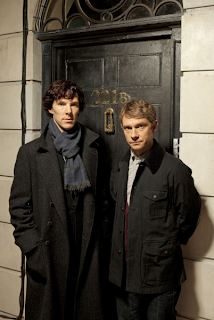 The currently filming modern day set version of Sherlock Holmes by CBS has gotten the BBC in a spin, with lawyers being consulted for a possible breach of copyright case.
One of the producers of the BBC's Sherlock, a modern day adaptation of the classic detective series had described  CBS's newly commissioned series Elementary as "extremely worrying".

Sue Vertue, not only a producer on the hit show but also the wife of co-creator Steven Moffat, fears that CBS's new show could be the cause of copyright breaches due to the alarming similarities of the concepts behind both shows.

Elementary will bring the famous detective into modern day New York City, whereas Sherlock features Benedict Cumberbatch as the modernised title character solving cases in London.
Interestingly, the commissioning of the show comes not long after the American network approached Vertue and company about a remake of the BBC hit.

For CBS to come out with such a similar sounding show so soon is a cause for concern, Vertue told Britain's The Independent Newspaper.


"We understand that CBS are doing their own version of an updated Sherlock Holmes. It's interesting, as they approached us a while back about remaking our show," Vertue said.
"At the time, they made great assurances about their integrity, so we have to assume that their modernised Sherlock Holmes doesn't resemble ours in any way, as that would be extremely worrying.
"We are very proud of our show and like any proud parent, will protect the interest and wellbeing of our offspring."

As Elementary is still in its earliest stages of production, it won't be known for some time yet whether or not it could be found to have copied the British show.

Margaret Tofalides, a copyright specialist at law firm Manches, said: "The concept of a new Sherlock Holmes is unprotectable. But if the unusual elements of the BBC series – the modern settings, characters, clothes, plots and distinctive visual style – were closely reproduced in the CBS version, that could form the basis of a potential copyright claim."

An American Sherlock could threaten the revenues returned to BBC Worldwide from the Cumberbatch show. The episodes have found an international audience through DVD sales and iTunes downloads.

Posted by Gary Dobbs/Jack Martin at 05:22

Email ThisBlogThis!Share to TwitterShare to FacebookShare to Pinterest
Labels: sherlock