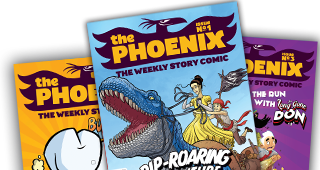 Amazon are to launch yet another imprint - 47 North will focus on fantasy, sf and horror for both print and Kindle. At the time of writing several name authors have been announced as publishing with the imprint and these include Greg Bear, Neal Stephenson and Dave Duncan. The imprint is activelly seeking submissions and details can be obtained from AmazonPublishing-PR@amazon.com

The Phoenix is a new weekly comic book aimed for children which is seeking script ideas - The Phoenix really is very different to any other comic. Think of us as a TV studio – ‘transmitting’ all kinds of wonderful stories over the course of a year. Some funny, some thrilling, some magical, some moving – and all entertaining and memorable, and much more involving! Details HERE

NBC News will launch NBC Publishing, the company announced Monday, using its own television assets as a starting point for e-books. NBC Publishing will begin as a digital-only publisher; although the title of its first e-book is not yet announced, the company says it will be released in February. NBC Publishing plans to release about 30 titles each year. They will be released as text e-books and enhanced e-books that include multimedia that can be seen on tablets like the iPad and Kindle Fire.

Posted by Gary Dobbs/Jack Martin at 04:03