It’s been some years since I’ve seen this movie and I was pleased to find it on DVD doubled with Quatermass 2 – the DVD transfer is bright and crisp and the black and white image looks sharp with no artifacts whatsoever. It’s another great DVD package from Hammer, though these films really are begging for more extensive extra features Scene selection and original trailers do not make up for a commentary or documentary.

The DVD bills the movie as the Quatermass Experiment on both the inlay and the disc itself but the correct title, and the one that pops up on screen in The Quatermass Xperiment – Hammer Films chose the spelling to put an emphasis on the X certificate which the movie originally recieved from the board of film classification. And although far removed from Hammer’s later horror series the film is regarded as the first of the Hammer Horrors.

The plot, taken from the BBC TV serial of the same name, well, the Quatermass Experiment in any case, concerns a spaceship that crashes back to Earth with only the one member of the crew aboard. That crew member, Carroon , has mutated into something and is able to absorb the life force of any living thing he comes into contact with. He first absorbs a cactus which causes his right arm to begin mutating. Carroon’s wife, Judith, hires a private investigator to break her husband out of the hospital. The escape is successful but Carroon kills and absorbs the private investigator in the process. 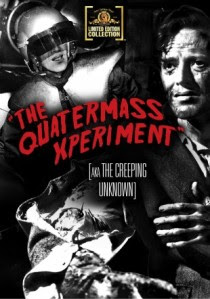 The original TV series was an enormous success with critics and audiences alike, later described by film historian Robert Simpson as “event television, emptying the streets and pubs, and Hammer wisely stuck to the same elements but did make the central character  of Quatermass something less of the square jawed hero. Here he doesn’t come across as particularly likable and considers his scientific work to be above all else, including human life. Jack Warner is at hand to provide a sidekick with his policeman who is not a million miles away from Dixon of Dock Green. Hammer also changed the ending – in the TV series Quatermass persuaded Caroon to commit suicide for the good of mankind, but in the movie version its all cool electrocuting the monster that was once a man.

Overall this is a classic SF/Horror film with  excellent performances from the entire cast, with special honours going to Richard Wordsworth as the doomed astronaut – he manages with facial expressions alone to create great sympathy as he stumbles across the countryside like Karloff’s Frankenstein’s monster. It may be pulpy and old fashioned but then it’s a damn sight better than many modern SF thrillers.
Posted by Gary Dobbs/Jack Martin at 02:20