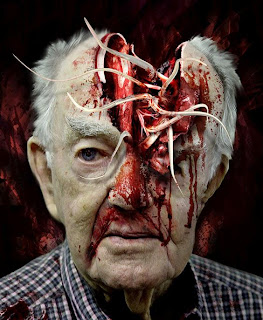 During the 80's I seemed to read nothing but horror fiction - it was a boom time for the genre. In the US Stephen King was outselling everyone and over in the UK, James Herbert was topping the best-seller lists. Direct to paperback horror novels were everywhere Guy N. Smith, Shaun Hutson, Gary Brander, Graham Masterton.


It was a great time to be a horror reader - in the newsagents there were magazines like the excellent, Fear which as well as offering all the latest horror news also published short fiction and encouraged its readers to try and become the new Stephen King. Fear was an excellent magazine and back in the day I never missed a issue, I bought its entire run. The magazine looked at horror in an intelligent way and as well as the latest gore books it also covered the classics such as Poe and Lovecraft. The magazine had a spin off fiction magazine called Frighteners but the first issue had to be pulled off the shelves because of a gory cover illustrating a Graham Masterton story. The story Eric the Pie, has become infamous and many claim it went a step too far and was responsible for the demise of the magazine. Those with a strong stomach can read the story as a PDF from the author's website HERE. Be warned the story is rather gruesome - it comes from respected author Graham Masterton, author of The Manitou and the author told an interviewer in 1996 that, 'On reflection I think it went too far.'

Having to pull the magazine after customer complaints dealt publisher, Newsfield a massive blow. Frighteners would go to another two issues and Fear vanished with issue no 33. There's an interesting article on the demise of Fear and the Frighteners story HERE.

The closure of Fear really pissed me off - I had a short story, Cissy's Heebie Jeebies lined up for the mag - I really wanted to get some fiction in Fear. Ahh well, I eventually placed the story with small press publication, Peeping Tom where it was well received. During this period there was a vibrant small press with publications like Skeleton Crew, Samhain and Peeping Tom keeping the torch burning for horror fans. And there were still several newstand horror magazines, The Dark Side and Shivers being the most well known, but for me none filled the void left by the demise of Fear.

I wrote for several of the small press magazines as well as interviewing writer, Peter James and being delighted when I managed to sell the piece to the well respected and long running, (still running) Interzone. My own horror novel, entitled Misty remains however in the loft, unloved and unpublished. And to be honest unpublishable. 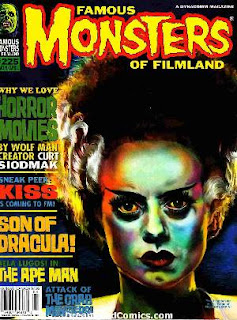 Horror books though, for the moment, remained numerous in the shops - there were all manner of creature on the prowl. James Herbert may have started it with The Rats but since then we had Slugs, Crabs, Cats, Locusts,bats, snakes and more than the odd slime beast. There were vampires, ghouls and werewolves running wild.

There were some great new talents being published around that period, some who have lasted, some who have not - Steve Harris scored high with a string of chillers starting with Adventureland, Mark Morris wowed us all with his novel Toady and these days writes, among other things, Dr Who novels for the BBC, Michael Slade (actually a team of American lawyers) grossed us out with The Ghoul and Clive Barker burst onto the scene with his innovative Books of Blood.

There was a period when the genre was getting unexpected critical respect. Stephen King analysed the genre in his Danse Macabre and respected critic and writer, Douglas E. Winter put together the excellent Prime Evil anthology.

New subgenres sprung up - Splatterpunk which was horror's answer to the Cyberpunk movement and didn't really mean much - if a book was overly gruesome it was labelled as Splatterpunk. Brian Lumley set about successfully reinventing Lovecraft with his Necroscope books. 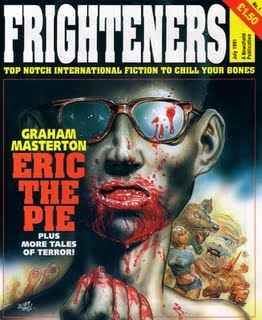 So what killed Horror - overkill. The market became saturated and not only with books but slasher movies, each less inventive than the last. The Jason's, the Freddy's and the Michael's ruled the celluloid roost. The Nightmare on Elm Street saga was particularly successful with Freddy becoming something of a superstar and even getting his own spin off TV series.

These days the horror genre is still there but like, the western, it is in a state of recovery - Stephen King no longer writes out and out horror, slasher movies generally go straight to DVD and horror is no longer a certain thing in marketing terms. But have no doubt one day horror will remove the stake from it's festering heart and return to once again torment the popular culture.
Posted by Gary Dobbs/Jack Martin at 12:09

Email ThisBlogThis!Share to TwitterShare to FacebookShare to Pinterest
Labels: 1980'S, FANGS FOR THE MEMORY