FANGS FOR THE MEMORY - THE GHOST GOES WEST 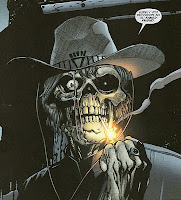 The western, the genre of choice for the truly cool, need not be left out of the Archive's spooky little Halloween weekend - there have been many oaters with a supernatural element - and it's not only Jonah Hex but think more mainstream offerings like High Plains Drifter, The White Buffalo and Pale Rider.

At first glance the western and the horror genres may seem far apart but scratch a little deeper and the viewer will discover there are scores of grim prairie tales out there. And it's not only the horror genre but its bastard sibling science fiction has also taken the trail out west - remember Westworld in which Chris from the Magnificent Seven became an android gunslinger! 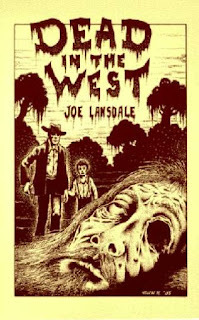 There are modern examples of writers known primarily for their westerns crossing over - Lance Howard for instance who produces thrilling westerns for Robert Hale's Black Horse imprint is also Howard Hopkins purveyor of fine horror tales. And another Black Horse resident, Chap O'Keefe has a short story coming up on Beat to a Pulp this weekend that crosses genres - but more on that later.

Horror icon, Stephen King's Dark Tower series can also be seen as a western of sorts - the man in black fled across the desert and the gunslinger followed.

Without a doubt the master of the horror/western hybrid is writer Joe R Lansdale whose unique scribblings have wandered into mostly every genre known to man or beast.

I'll leave you all to ponder with this hilarious scene from Billy the Kid V Dracula in which fang face gets pistol whipped.

Email ThisBlogThis!Share to TwitterShare to FacebookShare to Pinterest
Labels: FANGS FOR THE MEMORY

Did you ever read Razored Saddles, edited by JOe Lansdale. All western, all horror. Great stuff.