FANGS FOR THE MEMORY - OUTBACK GOTHIC

There's a special Halloween treat on Beat to a Pulp - that is a new story from western great, Chap O'Keefe. It was originally titled Night Howl it was written as a comic strip for Charlton Comics back in the 70's. The story was bought and paid for but never used as the comic folded shortly afterwards. However Chap had adapted the original script and turned it into a short story. 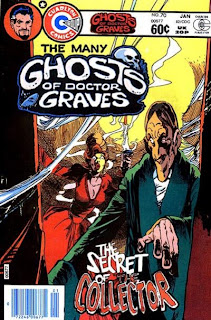 Chap tells us - "The Charlton scripts I wrote and that did appear were carried in Ghostly Tales, Scary Tales, Baron Weirwulf's Haunted Library  and The Many Ghosts of Dr Graves. I had the pleasure of seeing them "brought to life" by Steve Ditko (of Spiderman fame) and Tom Sutton.  But by the time I caught up with Charlton, the ghost comics were on their way out. To cut costs, Charlton switched from publishing "All New" stories to a reprint policy. As a result, some of the scripts I wrote never appeared. Others I've seen more than once, since they were syndicated and I picked them up in Aussie printings."

It's currently over at Beat to a Pulp and the Archive urges you to read it.
at October 31, 2010

Email ThisBlogThis!Share to TwitterShare to FacebookShare to Pinterest
Labels: chap o keefs, FANGS FOR THE MEMORY

I hope folks drop over and leave a comment on this top story. They will not be disappointed.