True Grit 2010 - why westerns fans should give it a chance

In a perfect world Hollywood would not be in the business of re-making classic movies but in reality, there will always be one classic (and some not so classics)  or other in the process of being remade. Mostly these remakes are dire as with Casablanca, sometimes quite good as with 3 10 to Yuma and there are rare occasions where the re-make is even better than the original as with Ocean's Eleven.

So re-makes will always be there and if we're going to have a plethora of reimagined movies in the cinemas, then why not a few westerns? There are precious little made these days and few with such a high profile as the True Grit movie that I think it is, at least, deserving of an open mind. I've heard too many people grumble about this one, saying it is sacrilege to remake a John Wayne movie and especially such an important one as this.

The original True Grit was the movie for which John Wayne won an Oscar but it's no Red River of The Searchers. I love the movie and Wayne is superb in the role of Rooster Cogburn - it's a great family action movie starring the greatest action movie star of them all. But it's not a precious work of art that should be hidden away, belonging to a previous age. And even if the re-make does suck, which somehow I feel it won't, the brilliant original will still be there and no matter how good Jeff Bridges proves to be as Rooster, Wayne will still be the definitive Cogburn. 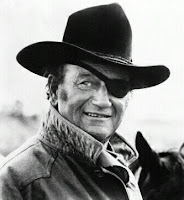 Yep Jeff Bridges who takes on the Wayne role for the 2010 True Grit, has some big shoes to fill but don't forget he's not the first to try on Wayne's role - Warren Oates played the character in the mostly forgettable True Grit: A Further Adventure.

Judging from the trailer and the pictures released thus far the actor looks superb in the role and I've not been so excited by a forthcoming movie since Debbie Does Dallas 9 - hang on, I think I might have actually dreamt that one and not seen it. Still it was good, especially the part where I and the...

Another point in the remakes favour is that the Coen Brothers are behind it - truly maverick film-makers if ever there were any so we will be spared a straightforward copycat movie.

So to those western fans thinking of boycotting this one - "All we are saying is Give Rooster a Chance."

Yep I'm looking foward to this one:

I'll definitely give it a chance. I like Jeff Bridges a lot.

I think jeff bridges is a good actor and i like him but in True Grit he had no emotion and face was always the exact same, John Wayne had awesome facial expressions that made the movie better and showed some awesome emotion most of the time anger but still lol. The new True Grit is good but I love the old one.

Morgan - I too prefer the original, but this remake is one hell of a fine movie.