Louis L'amour himself provides the voice over introduction to this two part TV-Movie, and for some reason he states that the Sackett family were originally Welsh immigrants. In the book they are of English decent - not that it makes much difference ( well apart from Welsh is cooler) but I thought I'd point it out.


The TV movie split across two parts clocks it at just over three hours and is based largely on two Sackett novels - The Daybreakers and Sackett and was first broadcast in 1979 and it's a pretty good movie but it is littered with silly mistakes - for instance the film is set in 1869 and yet most of the men use Winchesters which were not produced until the 1870's. The model used in the movie held seven cartridges and yet there's a scene where Tom Selleck as Orin Sackett fires fourteen shots before needing to reload. And there is a glaring cock up in the climatic shoot out when between them the three Sackett boys kill eight men and yet they were only fighting seven. Where did the extra man come from? 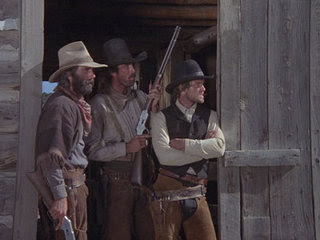 There are other mistakes littered throughout - it was as if the director just couldn't be bothered. For instance interior night times scenes feature characters walking past windows and it is clearly daytime outside, characters pull on doors that open outwards and, best of all, when Ben Johnson is shot in the leg he makes a crutch and then limps on the wrong leg.

However despite all this The Sacketts is still an enjoyable movie - the cast are excellent and there are many western veterans included - Glenn Ford, Jack Elam, Ben Johnson, Slim Pickens. The story is also compelling and paced well so that the three hours pass by quite easily. However that said,  I've read L'amour's entire Sackett saga and feel that the series deserved a far better movie than this, or at the very least a continuity director who knew their job. 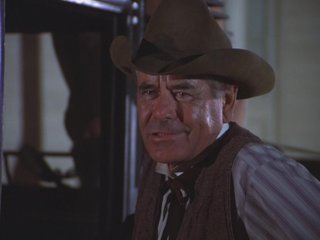 Sam Elliot, as always, steals the show and dominates every scene he's in but Tom Selleck was always a great cowboy.

Well worth watching then but if the makers didn't seem to take it too seriously then maybe the viewer shouldn't either.
at October 04, 2010

Email ThisBlogThis!Share to TwitterShare to FacebookShare to Pinterest
Labels: the sacketts movie

I thought this was really pretty good. I liked all the actors who played the characters.