McCartney on the run 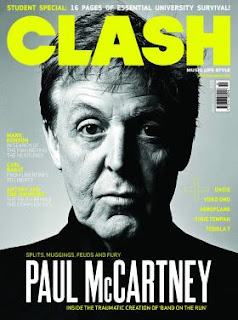 Suddenly cool again (Well as long as he stays off the naff X Factor Christmas special) Paul Mccartney has talked to Clashrock magazine about the coming reissue of his most famous post-Beatles album, Band on the Run -
In the wake of The Beatles’ split, Paul McCartney, cast as the villain in their acrimonious fall-out, conquered depression, public antagonism and critical derision to produce his own personal masterpiece and emerge a prominent solo force. This is the story of ‘Band On The Run’ and its punishing creation.
By the time the world learned of The Beatles’ demise, Paul McCartney was holed up in his farm on the Scottish island of Kintyre, preparing for the onslaught of legal and personal consequences [see side panel for Paul’s side of the tumultuous story]. His debut solo record was released the week after ‘Let It Be’, the group’s final album - it had been ready for some time, but he was outnumbered and powerless to get it out before The Beatles’ swan song. It was the final straw in a futile conflict and he publicly declared the end of the band to a shocked world. From hereon in, Paul was on his own. FULL INTERVIEW
at October 22, 2010