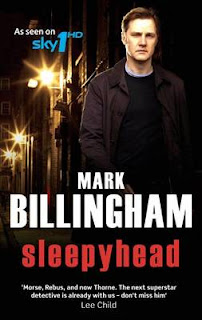 The Tom Thorne series of books by Mark Billingham are now available in new TV tie-in editions - I've yet to catch SKY One's version of Thorne but I am eager to see what they make of this great series of crime novels.

The first Thorne novel, Sleepyhead seemed a kind of a horror hybrid with its cleverly macabre plot, which is what initially attracted me to the books. And as soon as I read the first I was hooked and have followed the series ever since.

If you've not read any then now is the time to enter the murky world of Tom Thorne's London.

Check out the author's website HERE for news on the Thorne series both in print and on the small screen.
at October 24, 2010