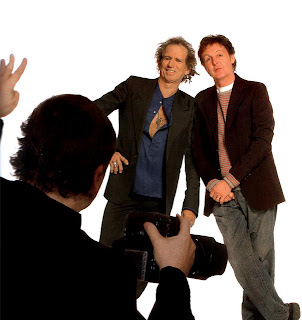 It's an enticing prospect - a song written by Keith Richards and Paul McCartney, a Beatle and a Stone composing together, but it's out there somewhere, as revealed in Keith Richards autobiography - The collaboration happened in 2006, when the two superstars met up by chance while both were on vacation at Parrot Cay on the Turks and Caicos Islands.
Richards did not elaborate in the book on what the song sounded like, and it is unknown if the writing session was recorded or if the song was even finished.
However, if the song ended up being completed, there would be the matter of recording it and possibly releasing it. And that’s where things get complicated, because although members of the Beatles and Stones have worked together in the past, members of the Beatles and the Stones have never before written any songs together.
It goes without saying, the McCartney/Richards song would be hot property, with record companies.
Posted by Gary Dobbs/Jack Martin at 11:52