The Sacketts: The First Family of the West part one 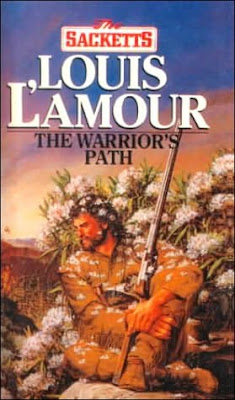 The first Sackett novel was The Daybreakers,  published in 1960 – though when L’amour penned this novel he was unaware that it would kick off a series of 17 novels that would cover the entire history of a frontier. Chronologically this first novel actually comes sixth in the series.
It's an ambitious series that remains unfinished since L’amour planned other books. There are some tantalising hints at what these might have added to the Sackett saga in the author’s The Sackett Companion (Bantam Books) which was published a few months after the author’s death and is essential reading for anyone wanting to follow the series. The book contains a useful Sackett family tree as well as a detailed synopsis of each of the novels.
"Much of American history has been the stories of families moving westward, and after I had written Daybreakers, I decided to tell the story of the opening of a continent as seen through the eyes of three familes, the Sacketts, the Chantrys and the Talons." Louis L'amour. 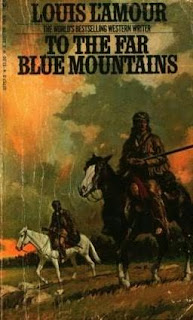 For this first part of a three part article we will look at the series in the correct chronological order, covering what are chronologically the first eight novels – The story opens with Sackett’s Land (1974), which is set in the year 1600 and opens up in England where we meet Barnabas Sackett and travel with him to a strange land across the sea where the Sackett clan would really make their mark. The book is followed directly by, To the Far Blue Mountains (1976) which is set between 1600 and 1620 and sees Barnabas return to the land of his birth only to find there is a warrant for his arrest. Barnabas faces much danger and when he returns to the New World he has his bride, Abigail with him.
The Warriors Path (1980) introduces King Ring Sackett and opens in the 1620’s – King Ring is the first son of Barnabas and he is both a skilled swordsman and crackshot. In this story he finds a wife and returns with her to Shooting Creek, which has become the homeland of the Sackett clan. 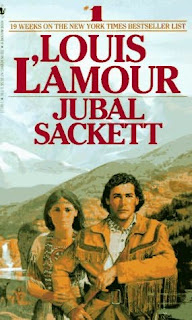 Jubal Sackett (1985) tells the story of Kin Ring’s brother Jubal, a man who inherited a love of wandering from his father. He is also something of a loner and he is constantly looking for one more river to cross, one more mountain to climb.
"The story of the West is our story, an American story but one for all the world, and all the world contributed. First came the French and the Spanish, then the Anglo Saxon and Irish and afterwards the Germans, the blacks, the Scandinavians and others." Louis L'amour.
Ride the River (1983) then takes up the saga and introduces us to Echo Sackett and a story set in the 1840’s, making Echo one of the fourth generation of Sackett’s born in America. Echo gives up her home in Tenessee in order to travel to Philadelphia to collect an inheritance. Another Sackett features heavily in this story – Regal Sackett is Echo’s uncle but other members of the family also make appearances. 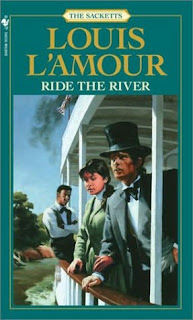 This all takes us up to The Daybreakers (1960) which as previously mentioned was actually the first Sackett novel published but comes much later in the chronology. The year is 1870 and it tells the story of brothers Orrin and Tyrel Sackett and formed the basis for the 1979 TV movie. Sackett (1961) comes next and is the story of William Tell Sackett and of his discovery of an ancient trail, which leads him  to a horde of gold and a girl and a whole heap of trouble. This novel’s storyline was also woven into the 1979 TV movie but the novel is a standalone story and neither Tyrell nor Orrin appear in the original novel.
Lando (1962) starts in 1873 and tells of Orlando Sackett who leaves the Tennessee Mountains in search for a better way of life. He becomes involved with The Tinker who is a gypsey with a mysterious background and like many a Sackett before and since Orlando becomes seduced by the allure of gold and sets off on a deadly adventure.
The Sackett series is not only the story of a bloodline but it is also the story of America and of the parts played by other nations in its creation - when Barnabas first landed in Carolina it was in theory owned by the King of England and Spain possessed Florida where there was much conflict with the French. Eventually the United States would form and throughout all this history there has been one or more members of the Sackett clan playing their part. The saga contains everything the reader demands from a western story as well as so much more and in the next part of this article we will travel to Mojave Crossing and continue onto Treasure Mountains.
Official Louis L'amour website can be found HERE
Posted by Gary Dobbs/Jack Martin at 15:55

I only regret that I have no more Sackett novels to read.

Ah, my first love. :-) I discovered these in about 1979 and have the whole series sitting on my bookshelf in pride of place. I remember in 1982 filling in the order page in the back of one of them and ordering about 6 copies in one go. I can't remember how much it cost me but I know to a 14 year old it was A LOT of money. Well worth it though (although I hardly ever read them now...).

Jo-I too was always ordering books as a kid, filling in that coupon in the back of the paperbacks - I can even remember the address I order so many times. PO boX 10, Falmouth, Cornwell - The Amazon of its day.