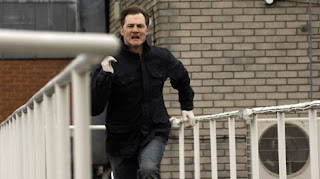 I've just watched all three episodes of Sky 1's adaptation of Mark Billingham's, Sleepyhead. I'd been eager to see this, having followed Mark Billingham's crime series since the first Tom Thorne novel. Indeed along with Peter Robinson's Banks series (which is also coming to TV) the Thorne books are among my favourite crime series. I'd recorded all three episodes to my Sky+ box and this evening sat down to watch them back to back.

What initially attracted me to the Thorne books was that they promised crime in the harder edged American style with a British setting. Thankfully the makers of the television series seem to have realised this and the show is shot in the fast style of the best American TV Thrillers. British crime dramas tend to be slower paced but this one starts out at maximum speed and doesn't let up until the climax. And all without forsaking any of the all important characterisation.

Thorne as played by David Morrissey is a tortured soul who is forced to face his own dark past when the trail for a present day serial killer leads back to something Thorne would prefer to forget -there's another neat stylistic touch when the characters are thinking back to the past and we see the present day characters while the past is played out around them in diffused colours. These are the kind of touches you'd expect to find in shows like CSI and not British crime dramas.

Aiden Gillen is also superb as the gay coroner Phil Henricks who also happens to be Thorne's best friend. Hendricks is a complex character who straddles two worlds and the actor brings alive the various facets of his character with blistering reality. And the rest of the supporting cast are also excellent in their roles and will no doubt be developed as more stories are filmed. 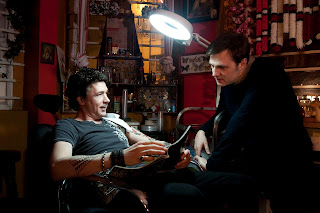 Mark Billingham must be chuffed at this version of his bestselling book.
at October 28, 2010