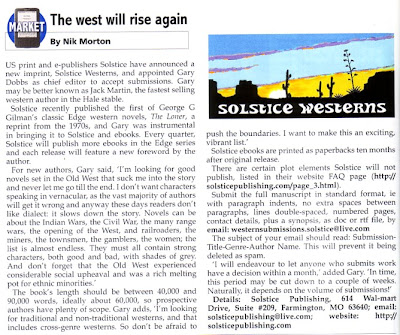 It's been a busy week over here in Archive land - I've been out filming scenes set in high summer all week - all location work and just to make things interesting we've had to contend with fierce storms and temperatures that make one wish they were wearing thermals.

However things will be picking up around here this weekend - I've posted a scan from the November issue of Writer's News which features an article from Nik Morton, Black Horse Western writer and part of the editing team at Solstice Westerns - click on the image for a larger readable version. The magazine's on sale in British shops now.

And very soon we will be giving you all the details on the next Edge eBook, a double edged volume that will contain two excellent westerns from the legendary George G. Gilman. Also keep an eye on the online eZine, A Twist of Noir which will very soon publish a new short story from myself, a blackly comedic noir piece called, The Man with The Sun in his Eyes.

Free fiction to read in one sitting - can't be bad. 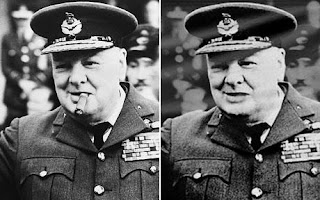 This weekend The Archive will also have a shocking report on the movement to have movies that feature tobacco use reclassified with an 18 certificate - this madness means that Bridget Jones' Diary and The Lord of the Rings are just two of the titles on the BBFC's list for possible  reclassification as adult movies because of tobacco use. Makes me want a pipe to calm my nerves - the over the top treatment of tobacco use has recently seen the BBC series Sherlock feature a modern day Sherlock Holmes who doesn't smoke his beloved pipe. And a photograph at a London Museum's Winston Churchill Exhibition caused fury when  the great leader's cigar was airbrushed out of history. We all know smoking is a dangerous habit but these health Nazis are a bunch of crack pots.

Political correctness has made common sense a thing of the past. If you catch a burglar in your house then it's probably best to help the poor soul by carrying your possessions to the front door lest he should trip up and hurt himself and it's you that end up in court! And the impact of the movement on popular culture is truly terrifying - It's getting beyond a joke, a film is made, upsets some group or individual, and the next thing is it's being pulled from release, re-dited, or hopefully at the very least, delayed until it all blows over. It seems you just have to complain about a film upsetting someone and the rest of the audience suffer. When the minority can dictate what the majority can and can't see, read and not read, hear and not hear even think and not think, what's the right in that?

The Archive has now officially declared war on political correctness and we will fight them on the blogs, on the websites -  we will never surrender and join them in their moronic, insufferable ways.

Happy to be a Solstice author. The Snake Den, my novel of a 14-year-old inmate's coming of age in the Hellhole at Yuma, comes out sometime next year. Maybe Gary has an approximate date.

Chuck/Charlie's book is indeed a fine read but then that will come as no suprise to those familiar with his Black Horse Western novels. The book, along with several other titles, is currently in the very early stages of production but our best guess at the moment is during the first quarter of 2011. Keep an eye on the Archive for more news.