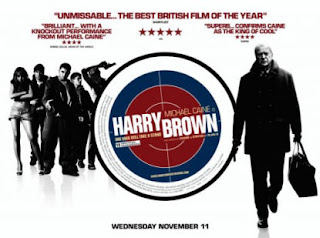 I avoided this film on its initial release - mainly because it came out around the time of Gran Torino and seemed to be nothing more than a copycat in the new and suddenly trendy, " senior-citizen-goes berserk-on-young-thugs" genre, but seeing the DVD at a knock down price (a steal at a fiver, guv)  led me to finally give it a try. I'm glad I did - I don't think Michael Caine has been this good since Get Carter.

Plotwise it's pretty basic - a revenge thriller in which an old man, the Harry Brown of the title, reclaims his neighbourhood from a group of gun crazed, drug addicted thugs. But there is much social commentary in the skilled hands of first time director Daniel Barber as he presents Britain's inner city slums as no-go areas to even the police.A police force that operates on rules and regulations rather than common sense.

There are some stylish if horrifying scenes - mobile phone footage of a young mum's murder, the drug dealers lair with the smack-heads shambling about like tooled up vampires and the gun play is mostly executed with Tarantino'ish choreography. 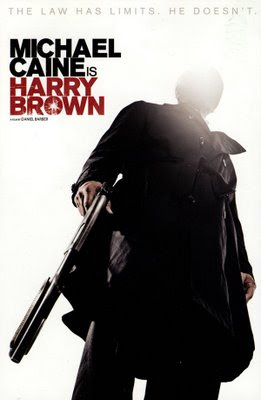 At the heart of the film though is a great performance from Michael Caine - in comparing the film to Grand Torino the viewer realises that although there are similarities in the characters Caine and Eastwood  portray these are only on the surface and where Torino is a reflective movie, Harry Brown is much more in the ilk of Death Wish. Though far more stylish than the Michael Winner shoot em up. The violence here is extreme though mostly  of the comic-book variety and the ending does stretch things a little too far. But throughout Caine plays it straight and adds much gravitas to the role.

An excellent film which starts out seeming to examine the socio-political reasons for council estates being run by teenage gangs but then resorts to crowd pleasing vigilante violence. A man's gotta' do what a man's gotta' do. - It's a western in different clothes and a damn good one at that.
at October 20, 2010

Here, here, Gary. I saw the film a while back and it is a cracker. A real gritty inner city movie with some fine acting from Caine. Great review, Gary.

'I do not believe it...mutherfucker!'

One Foot In The Grave with guns!

I liked it much more than the Clint film. I only liked the funny bits in Grand Torino.The barbershop bits were great. The rest? So so.The ending? Worthy of Sean Penn...you know?