Norman Wisdom, who died yesterday at the age of 95, always represented the little man facing and triumphing over impossible odds. The string of slapstick comedies he made in the Fifties and Sixties were a regular fixture on television when I was growing up and his Pitkin character became something of a hero. The little guy who kicked arse.

Wisdom's style of comedy was universal and appealed particularly to the post war working class and this adulation passed down from generation to generation - even today people delight when his movies are shown. And of course none less than Charley Chaplin called Wisdom his favourite screen clown. 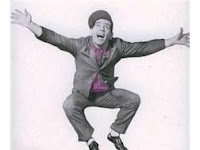 Wisdom continued with theatre work and television roles long after his film career had ended and in 1981 he shocked everyone with his portrayal of a man dying of cancer in the TV drama, Going Gently. In 2000 he was given a much deserved knighthood.

In 2009 - and reported on the Archive - Sky News made the error of announcing Wisdom's death in a rolling news report before pulling the piece and apologising, stating that Wisdom was very much still alive. The great comedian finally passed away yesterday.

A great all round entertainer that will be missed.