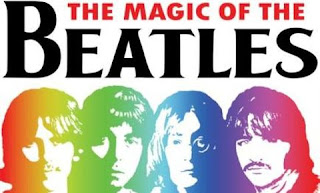 The post-fab four arrived in Pontypridd last night to perform their new show, The Beatles 50th anniversary Tour at the Muni theatre. Tribute bands are not really my thing but as my Dad arrived with the tickets I went along, feeling that a less then splendid time was guaranteed for all.

Boy, was I wrong.

As soon as the curtain raised and the four mop tops were revealed a smile formed on my lips - each of the four had the look down to pat - especially John Lennon was was absolutely magnificent and had all of the great man's mannerisms and at times looked more like John Lennon than Lennon often did himself. George Harrison also had a great physical similarity to the real thing. Initially off-putting was that Paul McCartney was right handed but after a few moments that ceased to matter as the band became The Beatles.

From Love Me Do to Let It Be, the band presented the entire Beatle story, taking in four costume changes, and had the audience singing along to the songs that will be around forever.

Because it was John Lennon's birthday, the Lennon character came on stage wearing a birthday badge and there was a touching moment when the audience joined in to sing happy birthday to the spirit of Lennon. And what a varied audience it was - there were young children with their parents and their grandparents. And we were all rocking to the Magic of the Beatles and for that time that the guys were on stage it was as if we were watching The Beatles themselves and songs from the latter Beatle period, which were never performed live, were expertly recreated.

The boys are taking the show across the UK and if you're a Beatle fan I urge you to see the show - great show, guys.

Related - To commemorate Lennon's birthday BBC Radio 7  have available on their website a brilliant play written by Ray Connolly who was due to interview Lennon on the day he was shot, as well as the famous Wenner Tapes with Lennon at his most truthful. Find it HERE
at October 10, 2010

Email ThisBlogThis!Share to TwitterShare to FacebookShare to Pinterest
Labels: the magic of the beatles