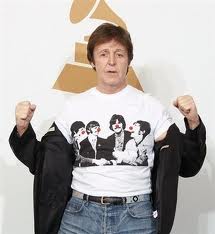 Course everyone knows that Paul McCartney is a mild mannered musician but few known that this hides his secret identity as Super-Mac – those in the know realise that Magneto and Titanium Man from the Wings LP, Venus and Mars was an attempt to leave clues as to Paul’s crime fighting alter ego in the music.

Well this week proof emerged when Paul McCartney was forced to become Super-Mac on a London street -  He saved a woman by pushing her out of the way of a speeding cyclist. The man hurled abuse as he narrowly missed them at traffic lights in London”s Oxford Street.

“I always get dropped off a few streets from my offices in Soho so I can have a bit of a walk and get ready for the day,”  Super-Mac told the Sun Newspaper.


“I was crossing the road when I saw this bike courier careering towards us. I grabbed this woman next to me and threw her out the way. He wasn”t slowing down, he was just swearing at me telling me to ”eff off”. He was going so fast he had no idea who I was. ” A miffed Macca continued.  “I started screaming ”You”re big and clever, aren”t you? Oh you”re so clever”. At this point it is unclear if the Macca was fuming or merely befuddled.

“I was effing and blinding and realised everyone was watching," Super-Mac said. " He could have seriously hurt her and others. He was a menace,”
at October 16, 2010

How wild is all that?! Imagine having your life saved by Paul McCartney?!

I love your site, It is a pleasure to visit.

I have added your site to my site.

Please link my site to your site.