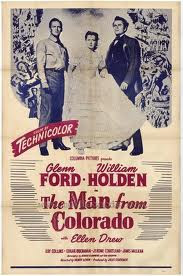 'I killed a hundred men today, I didn't want to. I couldn't help myself. What's wrong with me? I'm afraid I'm going crazy. No - it was the war, that's all. But the war's over now and I can stop.' - so writes Owen (Glenn Ford) in his diary after ordering the slaughter of 100 confederate soldiers who were trying to surrender. The war ends immediately after the slaughter and Owen finds himself having to face civilian life with the demons of the long war raging inside him.


Ford takes up the post of Federal Judge and he immediately appoints his best friend, played by William Holden as Marshall. The problem is that Holden knows that Ford murdered the Confederate soldiers and he fears that there is something wrong with Ford, that the war has affected him in such a way that he has no control over himself and is not fit to hold such an important position as Federal Judge.

Ford is totally compelling as the psychotic Owen and as the film progresses he creates such a feeling of unease that the viewer doesn't know what he will do next.  Eventually William Holden's character tries to take Ford's power from him and the men end up on opposite sides, setting the scene for a great showdown. 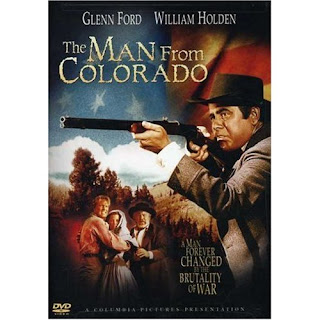 This is an unusual western that is totally dominated by Ford's performance as the psychotic ex soldier, turned hanging judge.

The DVD, region 1 import, contains a great high definition transfer with crisp colours and a booming soundtrack - I can highly recommend this one.
Posted by Gary Dobbs/Jack Martin at 17:40

Email ThisBlogThis!Share to TwitterShare to FacebookShare to Pinterest
Labels: the man from colorado