Fangs for the Memory - Ghostly pictures

This picture was taken by the husband of the woman in the picture on a sunny afternoon with ordinary print film. They had just moved into their new home in Chicago, Illinois. In the window to the left of them clearly shows a older woman with her hair put up in a bun and a bulldog next to her. There was no one in the house at the time of the picture taking. 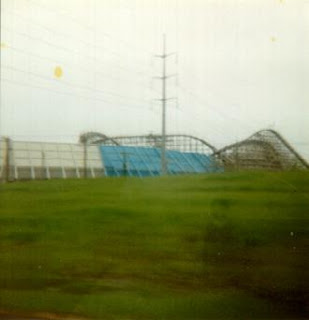 This second photograph was by Jackie Rhame of Florian, Alabama during a visit to a Six Flags Great America Amusement Park in Arlington, Texas. It clearly shows a semi-transparent figure of a little boy in the grass dressed in a red sweater with a white collar or shirt. The camera was a C- 126 and it was misting rain and humid outside. She was simply taking a picture of the Texas Giant.

And finally this remarkable image first appeared in the Chicago Sun-Times (12-21-03) and was apparently captured with a closed-circuit security camera at Hampton Court Palace in London, England. The palace was built in 1525 on the River Thames 10 miles west of central London and was one the the places that King Henry VIII lived. Jane Seymour, his third wife, died there giving birth to a son, and her ghost is said to walk through one of the cobbled courtyards carrying a candle. No one seems to know what this ghostly figure represents but according to security, it sure looks like a ghost. 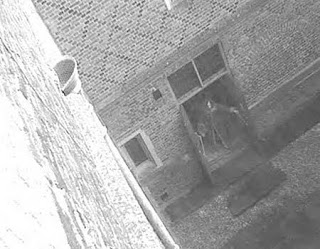 Posted by Gary Dobbs/Jack Martin at 17:29

Email ThisBlogThis!Share to TwitterShare to FacebookShare to Pinterest
Labels: FANGS FOR THE MEMORY, ghosts

Thanks foor the cool pictures for Halloween.

Hiya Dobby
Um, have you never heard of the IPhone Ghost App?
http://itunes.apple.com/app/ghostcam/id298221255?mt=8

These examples look just like some of the images available.
I'm not saying they definitely are but....
Anyway,
I was in a pub the other week when some kid was really freaking out some girls - two of them were in tears - with some pics he said he had taken around their house.
The one girl was so near-hysterical I had to put my oar in and tell them.
The guy was NOT amused!

Actually I think I diagree with this app as it is obviously now not just being used for fun but to deliberately scare people and in some instances, downright fraud.
Look at this article for instance...
http://macenstein.com/default/2010/03/the-uks-sun-and-daily-mail-fooled-by-iphone-ghost-app/

Weird since I just watched the move "shutter," which is all about this sort of thing, yesterday.