The Sacketts: The First Family of the West Part three 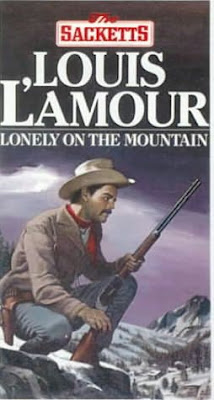 The third and concluding part of the Archive’s look at the chronology of Louis L’amour’s Sackett saga.
William Tell Sackett is the narrator for Lonely on the Mountain (1980) which is set in the latter half of the 1870’s and although Tell takes centre stage both Orrin and Logan Sackett have major parts in the story. Logan in fact is the catalyst for this particular adventure when he sends out word that he needs help to raise a herd and drive them North. His call is heard by other members of the Sackett clan and the plea is answered by Logan’s cousins, Tell and Orrin. So with Tell Sackett ramrodding, Tyrel, Orrin, and Cap Rountree ride north to the wild country-pushing 1100 head of fat steers across the wide Dakota plains toward the mountains of far western Canada. Past Sioux, past Logan's treacherous enemies, through trails no cattle had ever crossed, the Sacketts drive on. Because when you step on the toes of one Sackett they all come running.
Chronologically the reader now needs to be pick up 1972’s, Ride the Dark Trail to pick up on the Sackett timeline. The book narrated by Logan Sackett and features the Talon side of the Sackett family – Emily Sackett, of the Clinch Mountain Sacketts married Reed Talon and named their first child Barnabas after Barnabas Sackett who came to the new world and started the Sackett bloodline in America.
Logan Sackett was wild and rootless, riding west in search of easy living. Then he met Emily Talon, a fiery old widow who was even wilder than he was. Tall and lean, Em was determined to defend herself against the locals who were trying to steal her land. Logan didn't want to get involved, until he found out that Em had been born a Sackett. Em was bucking overwhelming odds, but Logan wouldn't let her stand alone. For even the rebellious drifter knew that part of being a Sackett was backing up your family when they needed you. 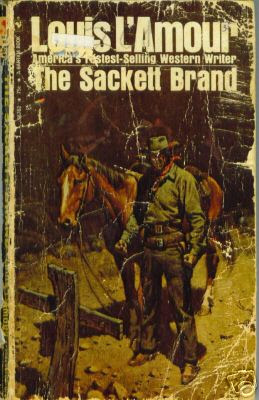 The Sackett Brand (1965) comes next. Narrated by William Tell Sackett and set in the final years of the 1870’s. Tell Sackett and his bride, Ange, came to Arizona to build a home and start a family. But on Black Mesa something goes terribly wrong. Tell is ambushed and badly injured. When he finally manages to drag himself back to where he left Ange, she is gone. Desperate, cold, hungry, and with no way to defend himself, Tell is stalked like a wounded animal. Hiding from his attackers, his rage and frustration mounting, he tries to figure out who the men are, why they are trying to kill him, and what has happened to his wife. Discovering the truth will be risky. And when he finally does, it will be their turn to run.
The last of the Sackett novels in chronological order is 1967’s The Skyliners which takes place during the years 1875 – 1879. Narrated by Flagan Sackett,The Sky-Liners, Louis L’Amour introduces Flagan and Galloway Sackett, heading west from Tennessee to seek their fortunes. That’s when they came across an old Irish trader who offered them two fine horses if they would agree to escort his granddaughter, Judith, to her father in Colorado. Flagan saw nothing but trouble in the fiery young woman, but they needed the horses. Unfortunately, Flagan was right, for Judith had fallen for James Black Fetchen, a charismatic gunman whose courtship hid the darkest of intentions. Now Fetchen and his gang are racing the Sackett brothers to Colorado—leaving behind a trail of betrayal, robbery, and murder. Flagan and Galloway can only guess why Judith is so important to Fetchen and what awaits them at her father’s ranch. One thing Flagan knows for sure: The tough and spirited woman has won his heart. But can he trust her with his life?
There are also two short stories that should feature in the Sackett chronology. "The Courting of Griselda" (available in End of the Drive) and "Booty for a Badman" (available in War Party)
The novel The Man from Broken Hills (1975) is often included among Sackett list since Milo Talon’s mother was a Sackett, but Louis L’amour in The Sackett Companion stated that the book is  a Talon story and does not belong amongst the Sackett chronology. 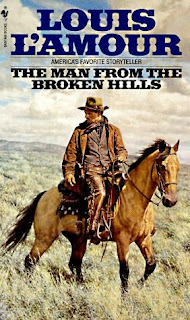 L’amour had other Sackett stories planned but he never completed them and the world lost perhaps its best known western writer in 1988, when L’amour died after a long battle with lung cancer. The author writes about future plans for the characters in The Sackett Companion, including tales set around the American war for independence.
"His death was a tragedy to anyone who admired literature, he showed people what a good story can do, whether it was an escape from the everyday life or just a bedside companion. His stories painted a picture in your mind that pleased anyone 8-80 years old, male or female. His writings could teach life lessons or bring people closer together like it did between my father and I. His work can take you on an adventure unlike others the average person is subject to. In a world that is so "high-tech" its a great feeling when you pick up a L'Amour book and are taken on an adventure filled ride through the world of literature." - S.J. Reese
Correct chronological reading order
Sackett’s Land
To the Far Blue Mountains
The Warrior’s Path
Jubal Sackett
Ride the River
The Daybreakers
Sackett
Lando
Mojave Crossing
Mustang Man
The Lonely Men
Galloway
Treasure Mountain
Lonely on the Mountain
Ride the Dark Trail
The Sackett Brand
The Sky Liners
In total these books cover the period 1600-1879
The main Sackett characters are listed below. There are also other Sackett’s mentioned in the various novels but it would be impossible to list all of these as some are never named.
Barnabas Sackett- The founding member of the Sackett clan. Travels to the New World to escape the warrant of the Queen. Killed by Seneca Indians. Son of Ivo Sackett, soldier and war hero.
Kin-Ring Sackett- First son of Barnabas Sackett, born on a buffalo robe in the heat of battle. First Sackett born in the New World. Married Diana Macklin from Cape Ann.
Brian Sackett- Second son of Barnabas Sackett. Leaves America with his mother and sister to study law in England
Yance Sackett- Third son of Barnabas Sackett. Best known for his quick temper and strength and willingness of action. Founder of Clinch Mountain Branch of Sacketts. Married a girl named Temperance Penney from Cape Ann.
Jublain Sackett (Jubal)- Fourth son of Barnabas Sackett. He was the first Sackett to cross the mountains and see the plains. Known as the quiet one, he is a ghost in the woods. Spends much time away from home and eventually quits the hills of North Carolina for the Rocky Mountains. Marries Itchakomi Ishaia, a "Sun" of the Natchee.
Echo Sackett- Only female member of the Sackett clan to narrate a story. Aunt of Tell, Orrin and Tyrel.
Logan Sackett- Twin brother of Nolan Sackett. Comes from the Clinch Mountain branch of Sacketts and lives up to their reputation. Rough, two-fisted, a man "with the bark on", and with a deserved reputation as being fast with a gun and hell-on wheels in any kind of fight, he has ridden the Owlhoot Trail and admits to skirting the dark side of the law on more than one occasion. A lot rougher than Orrin or Tyrel, he is nonetheless a generally decent man. Comes to the aid of his aunt, Emily Talon.
Nolan Sackett- Twin Brother of Logan Sackett. Comes from the Clinch Mountain Branch of Sacketts. Like his brother, he has ridden the outlaw trail. Rough and dangerous, with a hefty reputation as a very bad man to fool around with, he has a strong sense of right and wrong. Wears two pistols.
Orlando Sackett (Lando)- Son of Falcon Sackett. One of the last Sacketts to move west. Spends six years in a Mexican prison. Becomes a well-known fist-fighter and boxer.
Falcon Sackett- Father of Orlando Sackett. Formerly captain of a ship. Finds a lost treasure of great value and spends several years in a Mexican prison before finally escaping and being rescued by his son.
Flagan Sackett- Brother of Galloway Sackett. One of the younger Sacketts. Has a strong will to survive. Rarely found far from his brother.
Galloway Sackett- Brother of Flagan Sackett. Tall and handsome, nearly fearless in the face of danger. Known to brave danger and live.
Parmalee Sackett-- A "flatland Sackett", Parmalee's family moved down to the richer flatlands while the majority of the clan stayed in the mountains. His affluent lifestyle has not made him weak, as men who have braced him could testify - if they were still above ground.
at October 19, 2010

Why does Flagan Sackett plan to marry Judith Costello at the end of The Skyliners then in the book Galloway he meets and supposedly marries another woman? And even William Tell has many love stories with different women although the story of Ange follows through.