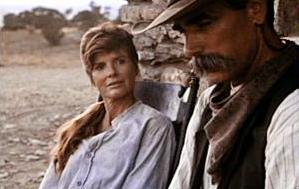 This adaptation of the Louis L'amour novel was produced by the TNT Network - starring husband and wife team, Sam Elliot and Catherine Ross, Conagher is as much a love story as an all action western. And it sticks closely to the original novel and it's also a nice touch having Louis L'amour's daughter show up in a small role - he plays the former saloon girl on her way to San Francisco.

But the film belongs to Sam Elliot as the honest cowpuncher, Conagher, a man who stands firm against all odds in order to do the right thing. It's a compelling performance by both leads and their love story develops naturally and doesn't interfere with the western action the viewer expects from a film such as this.

Elliot won a Golden Globe for his performance in this western and the award was well deserved.

Email ThisBlogThis!Share to TwitterShare to FacebookShare to Pinterest
Labels: conagher

I've got the DVD and the book but I can't say hand on heart that either are my favourites in the genre even with the quintessential cowboy Sam Elliott at the helm.

Eliot was just great as a L'Amour character. He always carried it off. I don't think there was one of his western movies taht I didn't basically like.

Thank you, that was extremely valuable and interesting...I will be back again to read more on this topic.

Anon - you made me giggle but you are quite correct. I fell asleep