The ninth James Bond novel, Thunderball came from an original idea for a movie script which Fleming worked on with Kevin McClory and Jack Whittingham prior to Dr No becoming the first Bond movie. When the project fell through, Fleming retained the novelization rights to the story and was thus able to develop Thunderball from the original project. 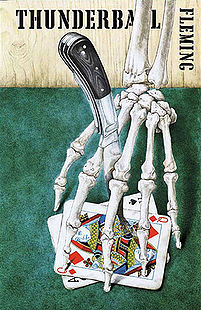 As such Thunderball is technically the first novelization of a screenplay even if the resulting movie hadn't been produced when the book first saw print. Ironic then that Fleming based the novel on a screenplay because it is one of the most full and detailed novels in the entire series. The book, often called the first in the Blofeld trilogy, also marks the theme of mortality, particularly Bond's own, that runs through the later novels.

"To begin with he (Bond) was ashamed of himself- a rare state of mind. He had a hangover, a bad one, with an aching head and stiff joints. When he coughed - smoking too much goes with drinking too much and doubles the hangover - a cloud of small luminous black spots swam across his mind like amoebae in pond water."

Bond is ordered by M to the Shrublands Health clinic because the agent's fitness level has been sloppy of late. Bond is not happy with this but if he wants to return to active service he has little choice but to obey. However the clinic proves far from the restful experience expected and whilst there Bond encounters one Count Lippe and starts unravelling a series of clues that will lead the agent to the vast criminal organisation led by Ernst Stavro Blofeld. And of course there is the matter of a pair of stolen atomic bombs which sees Bond placed back onto active service. 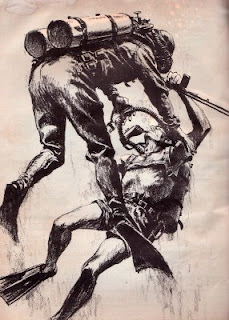 The book is terrifically well written and Fleming's journalistic eye for detail is much evident, particularly in the underwater sequences in which the author brings the almost alien landscape to life for the reader. Felix Leiter is also used well in this novel and as much more to do than usual and does not merely serve as a foil for James Bond, nor merely as a plot device.

The growing sense of urgency is highlighted as Bond struggles to find the stolen atomic bombs before the deadline. And the gambling motif is continued throughout the book with all of Bond's successes resulting from him playing hunches.

Thunderball may have started out as a collaborative effort but in the final analysis it is one hundred per-cent Ian Fleming.

Thunderball ranks among the best in the series.
at October 13, 2010

Great post Gary! I love Fleming's Bond novels and I also recommend Thrilling Cities, a work of non-fiction. I'm preparing a post on the Walther PPK and I'll let you know when its posted in the next week or so. Fleming was a masterful writer and I treasure every one of those books!

First time I've seen the book cover that you posted. Is that from a British edition? Thunderball is one of my favorite Bond movies, but not so much a favorite book. I prefer Dr. No to it, among others. Glad to see you back and posting more Bond reviews.

I consider this book to be one of the weaker in the series. Even so, the first half of "Thunderball" is very very good, on par with the previous grat novels of Fleming. It's the second half that really drags this book down in quality.