Ben Willians was one of the first friends I ever made on-line - we virtually met because we had a shared passion for The Beatles and one day in conversation I mentioned liking Doctor Who when I was a kid and Ben then revealed himself to be a huge fan of Doctor Who.

Despite being half my age and not even being born during  the original run of Doctor Who, Ben is a font of knowledge on all things Doctor Who and Sci-Fi.And so here he tells us why Doctor Who is suitable for Halloween viewing. 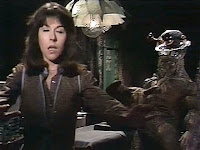 The problem is that Doctor Who and Halloween really don't go together as well as you would assume.  When most shows do a Halloween story there is a distinct change of pace.  The most extreme example is probably the annual Simpson's tree house of horror.  But really the "Halloween Episode" is a staple of US tv.  This is where we hit the first problem.  Halloween as we think of it these days is basically an American import to the UK (Yes I am aware of its much older tradition on these shores).  Doctor Who is essentially British and tends to retain a tradition of Humanist rationalism within the implausible concept of the show itself.

Finding an obviously fitting Halloween story for Doctor Who is therefore not that easy.  You can't simply look to a "scary" or "holiday special" in the same way that you can for many a US show.  Of course there are many scary or creepy moments in the show's history.  But if scary or creepy is the basis for the link I may as well say the era begining in 1963 and ending in 2010 to date!

The most superficially obvious crossover into Halloween territory actually occurs in the Hartnell era in the story The Chase.  During one episode of that story the Tardis crew, in homage to the old Universal horror films, find themselves trapped in a haunted house complete with bats, skeletons, Dracula and Frankenstein. The Doctor must have been feeling particularly senile that week and/or smoking some really good shit as he theorises that they must have landed in a land where nightmares are real.  Needless to say this was not the case and they were actually in a glorified amusement.

I am tempted to think that The Powers That Be made a vow never to tread into this territory again because there really are slim pickings for any Halloween link until the Tom Baker era.  The best examples I can think of are the alleged Pat Troughton "Classic" The Tomb of the Cybermen and the "We'll all pretend its a classic even though we all know its not" Jon Pertwee story "The Daemons".  Better writers that I have already made a compelling case for the Cybermen as being modern day re-interpretations of the Vampire Mythos, but in Tomb they are better seen as Mummys locked in a pyramid.  The story doesn't have a remotely Halloweeny feel, but it works as a 60s take on the Universal horror films.  Quiet why the Doctor decides to help revive and then re-entomb the Cybermen remains a complete mystery to me.  The Daemons is notable for being the first Doctor Who story to do "The Devil" and "Evil Vicar" and probably the first attempt at deliberately ripping off the Hammer Horror house style.

It is only with the Tom Baker era that the show ever consistently goes Halloween.  Indeed the first three years of Baker's era, headed by producer Phillip Hinchcliffe and Robert Holmes, is replete with homages to the Universal Pics and the Hammer Horror pics.  For the most part this is where you will get your Halloween Who fix.  The two standout stories are The Pyramids of Mars and The Brain of Morbius.

The Pyramids of Mars is one of the very best stories who ever did but also stands as spooky atmospheric tale complete with Mummys, ancient egyptian gods and creepy sound track.  This story is filled with a sense of jeopardy and may well have more classic moments than any other individual story.  It certainly has its share of stylish death scenes.

A couple of stories later we have The Brain or Morbius which is a solid take on the Frankestein story set for the most part in a creepy castle in a desolate wilderness. I find it a tad too derivative to be a classic, but its certainly atmospheric and is never less than entertaining.

The Hinchliffe/Holmes team was replaced by producer Graham Williams and several script editors, the most notable being Douglas Adams.  These teams were more interested in paying homage to classic literary texts than feature films.  So it is not until the final Tom Baker series under producer John Nathan Turner that we get another Halloween Who.  The story is State of Decay a reworked version of a story the Hinchcliffe/Holmes team were unable to use.  State of Decay is an absolute triumph of style and mood over substance.  There really isn't enough plot to keep the story going over 4 episodes, but you don't care.  The tale of a primitive planet ruled over by three Vampire Lords is more mysterious and moody than it has any right to be.  The ultimate baddy "The Great Vampire" can only be dispatched by a bloody great spaceship going through his heart.

Thereafter there are meagre pickings.  The Davison era was a mish-mash of 80s style Hard SF and Fairy Tales, Colin Bakers tenure was a cannibalisation of the shows on history.  McCoy's was a huge creative resurgence, but owes far more the 80s comics than anything else.

Happily the 2005 relaunch takes a new approach to these matters, happy to co-opt existing archetypes for the benefit of casual viewers rather than re-interpreting them as the classic series did.  The show almost immediately presents us with a ghost story in the Unquiet Dead.  This story has all that you would want, Ghosts, aliens, Charles Dickens, corpses rising from the dead and seances. Its fantastically well presented and would have been a classic of the 80s.  I don't find it stands up to the rest of the Eccelston era, but I am apparently in the minority on that one.  Again its a question of degree and its never less than entertaining.

One series later we have Tooth and Claw a Wearwolf story set in Victorian times (indeed featuring the Queen herself).  This one is an out an out classic to my mind and proof that you don't always need to be re-inventing the wheel to get a good story.  This one throws in all the normal cliches, but does so in a highly effective manner. The Wearwolf itself is creepy as all hell when in human form and the CG version is very effective for a UK TV budget, indeed it puts plenty of US TV and Movie CG monsters to shame.  The best moments though are were you can only hear the Wearwolf creeping around the characters.  There are also Kung-Fu cultist monks so there added value for you.

Next up we have The Impossible Planet/The Satan pit.  Set Forty Thousand years or so on a base orbiting a black hole, this would not immediately bring to mind Halloween.  On the other hand the baddy is the Devil and it has a guy walking around in a vaccuum with weird writing on him.  The story owes as much to previous Who history and Lovecraft as it does to the Devil mythos and scores very highly on the creepy as all hell factor.

The last foray of the tenth Doctor into Halloween territory is The Shakespeare Code.  A hugely enjoyable romp featuring actual witches on broomsticks using voodoo on their victims.  A good time for one and all.  The nearest the eleventh Doctor has come under the era of the Moff is Vampires of Venice which harkens back to the Hinchcliffe/Holmes obsession with Hammer Horror.  Unfortunately this one is literally a damp squib featuring as it does fish disguised as Vampires.

Time, space and memory prohibit me from delving too deeply into the books, audios and comics. I am aware of the novel Forever Autumn, but not having had the chance to read it I can't comment.  I would however be remiss if I did not give a shout out to the comic strip "The Way of All Flesh" and the audio story "Master".  The Way of All Flesh is an Eighth Doctor tale set during the Day of the Dead and is the nearest thing to a Doctor Who story taking place during a Halloween celebration (yes I am aware of the differences, but on the comic strip page it really doesn't matter too much).  Master is the definitive (to date) Doctor Who haunted house story.  It makes excellent use of the often morally ambiguous seventh Doctor and it almost certainly an inspiration for the Doctor/Master backstory presented in the new RTD years.  Aside from the ghostly goings on the main baddy in the story is Death herself so your note going to get much more supernatural than that!
Posted by Gary Dobbs/Jack Martin at 07:39

Email ThisBlogThis!Share to TwitterShare to FacebookShare to Pinterest
Labels: ben willans, Doctor who, FANGS FOR THE MEMORY