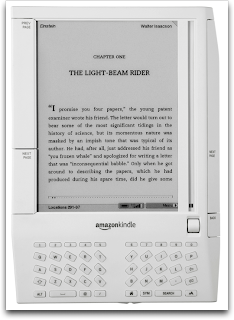 A UK version of Amazon's Kindle is expected this autumn - publishers recently announced that they were expecting a October release for the gadget which has been a huge success in the US market. Last week Amazon announced that they had secured a UK manufacturing deal for the device. One of the biggest problems to the digital market is pricing of e-books which the current US system hardly being fair to the consumer. The average price for a new release in the US is about $9.99 which is not that much lower than a regular printed edition.

Two Ravens Press are going against the trend by offering e-books at half the price of the printed editions - the books will also be DRM free which seems the way to go as DRM places unfair restrictions on the end user. Two Ravens are also to be applauded for their fair pricing on e-books.

Harver Secker Publishing have bought Henning Mankell's first new Wallander novel in ten years. The Troubled Man will be released in hardback in Feb 2011.
Posted by Gary Dobbs/Jack Martin at 07:27

amazon over here actualy gives away quite a few titles though, and most aren't that high. I've found 'em fairly reasonable.