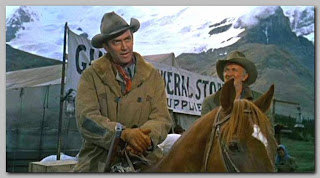 Anthony Mann in the director chair and James Stewart, Walter Brennan in front of the camera - pure celluloid heaven. The Region 2 DVD release features little in the way of special features, only the original theatrical trailer, but the transfer is crisp and the Canadian locations look stunning when viewed on a decent sized television. This is one of only a few westerns set in Alaska but not actually filmed there.

This was the fourth western collaboration between Stewart and Mann and it is as good as any of the others - in fact all the Stewart/Mann westerns are masterpieces of the genre. This time Stewart is partnered with Walter Brennan who plays his usual comedic old man. The two of them go up against Gannon (played by John Mcintire) who may be a thinly disguised version of real old west badman, Soapy Smith, who actually ran the town of Skagway and was killed in a gunfight though not in the way shown in the picture.

Stewart plays a bitter loner who has trouble interacting with anyone except for Brennan, though the two do on times bicker like an old married couple. But by the end of the picture Stewart has not only dispatched the bad guys but also learned that no man is an island and that there is true value in friendship.

Ruth Roman is excellent as the devious saloon keeper who falls for Stewart and find herself in the middle of a love triangle between Stewart, herself and the innocent but wholly good Kathleen Freeman.

An excellent western that Stewart considered the best of the five he made with Anthony Mann.

Some trivia here - the horse Stewart rides here was called Pie, all in all he rode him in 17 westerns, including all the Mann directed ones. When the horse died in 1971 Stewart had him buried on his ranch in California. Stewart said of the horse, he was the best co-star I ever had.
Posted by Gary Dobbs/Jack Martin at 06:00

Email ThisBlogThis!Share to TwitterShare to FacebookShare to Pinterest
Labels: the far country.

All the Mann/Stewart films are brilliant and you're right about masterpieces. I can't choose a favorite among the bunch.

I didn't know that about the horse. Good story. I think Wayne also had one horse that he rode in several Westerns, and I recall that the horse's name was Dollar. Could be wrong, tho.

David - me neither. They're all quality.

Laurie - at the end of this film the horse walks down the street alone and when the director asked Stewart if the horse could do it, Stewart said he'd have a word with him. He whispered something in the horses ear and the horse walked off along, without a rider - got the whole thing in one take.

Gary, it is true that John McIntire's character "Gannon" is indeed a loose portrayal of Soapy Smith adapted for the movie. My father's brother (my uncle) was contacted by someone in the 1950s but I do not know who as I have not seen the letter(s).

Jeff - I am most honoured to know you with your bloodline running all the way back to the old west. Be cool to meet in person one day.

When I visited your blog then I am very exciting to see your blog. Also just visit our blog and website for Social Network and Friends Online Community to reach more girls, boys for fun and entertainmnet and to reach their goal with good friendship.

I like to visit your blog about online friends and searching girls and boys for fun. I have a social networking website and indian friends online community to get more friends to be reached our personal and official friendship.