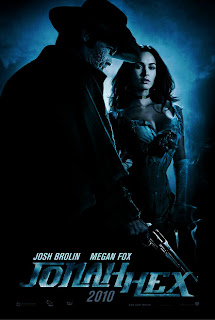 The scars on the Jonah Hex character in the movie poster certainly look better than the set pictures we posted - in those pics Josh Brolin looked like he had a minor skin rash but in the poster the level of facial trauma does actually mirror the comic book character. If this doesn't carry over to the screen I, and many other no doubt, will feel deeply cheated.

It has been announced that the movie Resident Evil 4 (is anyone waiting for this one?) will be in 3D - Expect tag lines like, 'A new dimension in fear'

Also due in 2010 is the revamp of old Freddy Krueger, originally played by Robert Englund but now with Jackie Elan wearing the fedora. The Teaser poster (shown here) doesn't reveal much of Krueger's face, no doubt to build anticipation for the eagerly awaited splatterfest. 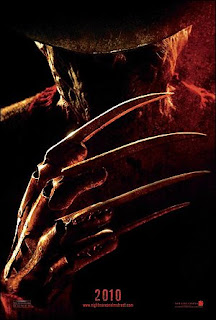 Another supernatural western goes into production - Ghost Town. Filmmaker James Moll, who is behind the story of a haunted theme park said, "It's the perfect setting for a big, spooky, family adventure with all the elements of a classic Western: cowboys, showgirls, gunfights, chases through creepy mines... all with a supernatural twist, "

It seems supernatural oaters may be the next stage in the western's continued journey back into the mainstream of public consciousness. Oh, I said that last bit.
Posted by Gary Dobbs/Jack Martin at 01:17

RE: Hex - I am SO there. Guess my Cowboys vs. Dragons short story might not be far from the mark, eh?

That second poster is for a western starring Freddy Krueger? What's with that glove. I think that's copyright Freddi.